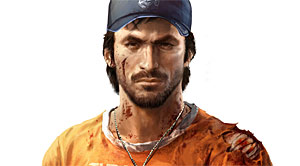 Deep Silver will launch Dead Island Riptide on April 23, 2013. Today’s real news, however, is that as the publisher intends to fortify the epic zombie sequel with more gameplay mechanics, new locales to explore, more types of zombie madness, an additional character class, and the best co-op zombie experience in gaming today, Deep Silver has finally revealed the fifth new playable character. Gamer, meet Dead Island: Riptide‘s John Morgan. Really, we’ve waited long enough to know who the hell he was and what he brings to the game.

“John Morgan is the new, fifth playable character in Dead Island Riptide that can join the team in addition to the protagonists from the original game. For years he has trained himself – and become a master – in hand-to-hand combat. His career in the U.S. Navy has not taken off as he originally had envisioned, so he spends his time as a cook on a military ship. Little does he know that soon he will have to bring his skills into practice when the ship nears the island of Palanai…”

When more details become available for Dead Island Riptide, be sure to check back on Yell! Magazine for the updates.