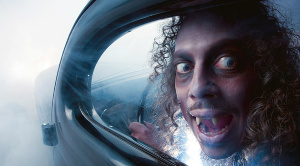 After Metallica’s last joint effort with Lou Reed, LuLu, there’s nowhere to go but up for the band. As such, the legendary band has an album in the works, and Kirk Hammett revealed to Loudwire that he has about 400 riffs that are ready to go. However, before Metallica turns their collective attention to the album, they must first wrap up work on some upcoming 3-D film. As the axeman put it:

”Once that particular project kind of dies down and we complete what we need to do with that, then we’re going to start writing songs. We’re going to meet up and start throwing ideas together… I foresee us starting to get together fairly soon, like in the next couple of months. We’ll start hammering away on it.”

Kirk Hammett also released a book last September entitled Too Much Horror Business. Basically, it documents his massive horror collection (which probably includes two outfits worn by Boris Karloff and Bela Lugosi) with a running dialog with So What! editor Steffan Chirazi. Hammett has been quoted recently regarding his first experience with horror as a 5-year-old boy, stating that Day of the Triffids was his introduction to the genre. Regarding his attraction to horror, he stated to Loudwire:

If you’re interested in seeing Hammett’s collection in person, you can look forward to a pretty big possibility of another Orion Music & More festival that will likely feature a second, but bigger, iteration of Kirk’s Crypt.

If you can’t wait for another Orion fest to see Metallica live, you better start making your way to New Orleans for the Voodoo Music & Arts festival; Metallica headlines on October 27.