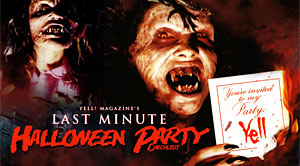 So, you have your Halloween planned. The date of the party has been set, you have your costume picked out, and you’re right in the middle of the naturally sexy and talented Dockery’s list of horror movies to watch this year. It all seems perfect.

Check yourself, Octoberfest. Are you actually prepared for Halloween? This only happens once a year, unless you’re Rob Zombie, in which case it happens every day. Do you really have what it takes to pull off something this monumental?

Of course you do, but that doesn’t mean that you don’t need a little help.

(Note: Octoberfest is a nickname that you’ll only have to hear once, for both of our sakes.)

First, is your costume up to snuff?

Have you actually tried it on? Once, I decided that I was going to go as a crazed Vietnam veteran. I had my camouflage jacket, and my T-shirt with the flag on it, but I felt that I needed a bandanna. A bandanna is a relatively cheap piece of attire, but I felt that there wasn’t enough time to go out and buy one. So, I used one of those cheap, mosaic-y kitchen cloths. I thought that people would be too drunk to notice.

They weren’t. At all. Every conversation I had that evening included the answer to why I was wearing a dish rag on my head. It didn’t ruin the evening for me, but have you ever tried to pick up a girl, only for her to inquire why you added the thing you wipe your stove off with to your wardrobe? I bet you haven’t, because common sense dictates that you wouldn’t do foolish stuff like that.

Don’t skimp on the details, especially if the detail skimping involves you wearing something that falls less into “goofy” and more into “second drawer from the bottom beside the fridge.”

Here’s a picture of me for proof a year’s ruined costume, all because I was too lazy to drive to Wal-Mart. I’m the idiot on the left.

Will you have to explain your costume?

This is always nerve-wracking. Often times, people will dress up in large, gaudy costumes and no one will ask them about it at all. That’s because a pack of fries or a giant penis is pretty self-explanatory. You’re not going as obesity or a symbolic hatred of your father, you’re going as fries or a dong. But if your costumes have a little more room to move your arms in, sometimes people will ask questions.

I’ve seen a guy dress up as Charles Manson, and, from someone who knows what Charles Manson looks like, he did a pretty good job. But not everyone else knew who the Devil’s Hole guy was. Explaining that you dressed up as the man who killed Roman Polanski’s wife can be socially shattering, unless you’re in the right, bizarre company. The key to a great Halloween costume is something that fits you, combined with something that is accessible to others, especially if your party doesn’t have a specific theme and is just “Drink until you’re in someone else’s bed,” which leads me to my next point.

From the practical to the metal, we’ve got you covered for your last minute Halloween party checklist…