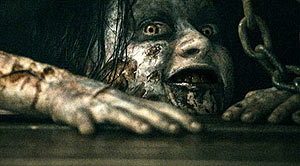 Tomorrow my friends is big day since Sony Pictures has announced via a teaser video clip on YouTube that the Evil Dead remake will finally see lights to an exclusive red band trailer tomorrow.

As for now, the preview above gives us a good look at how the New York Comic Con (NYCC) crowd reacted at the panel two weeks ago, and also give us a tiny taste at what to expect in the new Evil Dead, which is slated to be released in theaters on April 12th, 2013.

Bruce Campbell and Sam Raimi once again return in the horror franchise they started but as producers, including award-winning screenplay writer, Diablo Cody.