Autopsy: Feast For A Funeral – A Bloody Sweat Treat 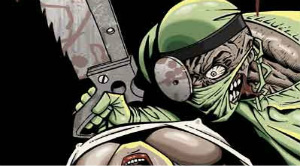 While I love a good autopsy buffet, that’s not what this is about. This is much more exciting. This Halloween, E-Comix and legendary death metallers Autopsy will release Autopsy: Feast for a Funeral, a fully authorized comic book. Halloween does bring sweet treats.

“Autopsy has driven the hearse to bring death metal to the masses since the late 1980s,” said E-Comix President and Publisher Vince Brusio. “It was a natural fit to fuse their brand of music with a grisly ghost story. So we took the cover image of Severed Survival, expanded on it, and developed a story that takes place on Halloween night. It’s pretty gory stuff. As it should be.”

Vocalist/drummer for Autopsy, Chris Reifert, commented, “We’re damn excited about this, and know it will be a real killer when it’s done!”

The comic book tells the tale of college kids who make a terrible mistake. One for which they must suffer, and pay in blood. When they play with stolen property at an impromptu field party, they open a doorway that allows spirits into our material world. A rescue is planned, but none of this is made known to a biker gang that doesn’t appreciate their turf being trampled on by strangers. Seeking vengeance, the gang approach an old abandoned house to wreak havoc on their party crashers, and learn too late that once the door to Hell is opened it can’t be closed.

Order Autopsy: Feast For A Funeral online at www.jsrdirect.com.