COD: Black Ops II Zombies (Mode) Screenshots – The Beauty Is In The Eyes 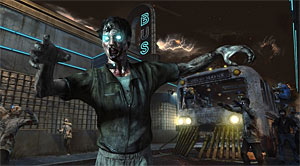 It hasn’t even been a full week since the teaser preview for Call of Duty: Black Ops II Zombies that pretty much revealed a moving bus as a possible safe ground, and now Treyarch is plaguing us with the first screenshots, which will be followed up with the official unveil of zombie mode tomorrow.

Mark Lamia, studio head of Treyarch, stated that the team working on zombie mode has free reign to do whatever it wants, regardless of the direction of the campaign. That also means the team plans to create the most ambitious zombies ever seen in COD. He also mentioned that “the multiplayer engine can throw around twice as many shambling corpses at once, and it can handle a co-op tally double that of Black Ops 1′s.” These details speculate the idea that eight players can play at once in zombie mode.

Make sure you check in tomorrow on Yell! Magazine for more updates on COD: Black Ops II Zombies.