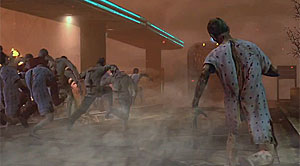 Treyard Studio’s, a subsidiary of Activision and the major video game developer behind the Call of Duty franchise recently revealed a 40-second long teaser trailer for Call of Duty: Black Ops 2 Zombies, via their official twitter account .

Since the COD zombie co-op mode typically evolve around in defending a building from a horde of zombies, the trailer indicates that a moving bus is the next safe house against the flesh-eaters. This draws in a claustrophobic, but very entertaining battle setting in zombie co-op mode, as I recall a similar bus scene in the Dawn of the Dead remake by Zack Snyder, and boy was that a hell of a good ride.

Check out the teaser trailer above, and remember that Black Ops 2 Zombies makes its World Premiere on September 26, 2012.