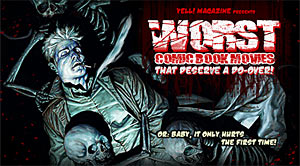 Is there a more widely accepted social convention than the do-over? People from all walks of life use it in everyday situations. Failed to make that 10 point ball of paper dunk in the office waste basket? Do-over! Fail to nail a particularly horrific tongue-twister during a verbal presentation? Do-over! Accidentally refer to your girlfriend’s sister’s ass as two ripe volleyballs glued together with love? Well, I tried to call do-over on that one, but apparently there are some limits to its powers that I wasn’t previously aware of. Also, my girlfriend has a mean overhand right.

Hollywood loves to shout do-over. With the market overcrowded by a glut of movie remakes and reboots of popular (or once-popular) franchises, it’s a do-over world. We’re all just living in it. With the upcoming reboot of the Judge Dredd movie universe right around the corner (in theaters September 21), we here at Yell! Magazine thought it would be a good time to examine the worst comic book movies that deserve a do-over. We also really want to know if Dredd 3D, starring geek icon Karl Urban, will wash away the stench of Stallone’s 1995 clunker? Or will it, and the entries on this list, prove that some things are best left alone?

Without further ado, let’s get to the Worst Comic Book Movies that Deserve a Do-Over…