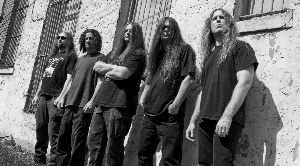 We recently saw Cannibal Corpse at Heavy MTL, and actually sat down with drummer Paul Mazurkiewicz for an interview. Like I said before, he’s a really nice guy and I can’t imagine why any country would want to ban him and his nice, all-American rock and roll band from performing or selling albums within its borders. But such is the case with controversial rock and roll these days.

Actually, many of those bans against Cannibal Corpse have been lifted, which enables them to tour in such countries as some of those located in Southeast Asia. If you happen to be a Cannibal Corpse fan and in that part of the world, you should should check out a show, as I’m sure it’ll be an experience unlike anything seen at a North American Corpse show.

Details and Cannibal Corpse Southeast Asia tour dates are below.

Agoura Hills, CA – August 30, 2012 – Death metal icons, Cannibal Corpse, have confirmed that they will be spending most of the month of October this year in the eastern hemisphere. This will be the band’s first time in many of these cities, which include Jakarta, Tokyo, Perth, Seoul, as well as a show in Hawaii on their way back into the Western Hemisphere.

This tour, once complete, will leave few stones left unturned for Cannibal Corpse in the realm of international touring. Updates from the band’s trek this October will be available (pending Internet connectivity, of course) via the band’s twitter account (@CorpseOfficial), bassist Alex Webster’s Twitter account (@AlexCannibal), and the official Cannibal Corpse Facebook page.

Cannibal Corpse are touring in support of their critically acclaimed, impossibly brutal full-length album, Torture, released through Metal Blade Records earlier this spring. On the 12th studio offering of their inspiring 24-year career, the Floridian quintet have never sounded so vital, the album building upon the wealth of powerful, dark, and memorable songs comprising 2006’s Kill and 2009’s Evisceration Plague and pointedly upping the ante at every turn.

Produced by Hate Eternal’s Erik Rutan, Torture continues to reap critical accolades from critics and fans around the globe and is yet another testament to Cannibal Corpse’s permanent allegiance to shrewdly arranged, pile-driving death metal madness.