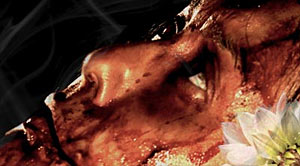 By now, we all know everything there is to know about Elizabeth Short, and the Black Dahlia murder case. We’ve read the news stories, we’ve seen the documentaries, and we’ve watched the Hollywood blockbuster. For those of us who are gamers, we’ve even tracked the killer in Rockstar Games’ L.A. Noire. This year, however, thanks to some amazing Indie filmmakers, we will be treated to a completely fresh look at the Black Dahlia murders. This, my dear lovelies, isn’t merely a “retelling,” it’s a whole new outlook. Provided, for your viewing pleasure, is the teaser trailer to a new movie, due out later this year, called The Black Dahlia Haunting.

In The Black Dahlia Haunting, we’re not forced to sit through another conspiracy theory story about who killed Elizabeth Short. What we’re given here is a ghost story (and who doesn’t love one of those?), where the ghost in question is the subject of Hollywood’s most notorious unsolved murder.

Holly Jensen (played by Devanny Pinn) returns to Los Angeles in order to investigate the murder of her father, by her blind younger brother, Tyler (Noah Dahl). While investigating, she manages to rouse the angry, and vengeful spirit of Elizabeth Short. Apart from this, the details on this little Indie gem are sadly lean, but from the teaser we’re given, it looks like it’s going to be gory, and creepy, and get-under-your-skin-and-make-you-squirm psychological-y.

In short, nightmares are sure to be had at the hands of director Brandon Slagle, and I for one, cannot wait to see the brutally mutilated corpse of Miss Short in my dreams. Nothing makes this gore-hound happier than a psychological horror that grips me by the throat, and doesn’t let go.