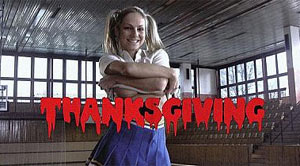 Remember back in 2007, when we got to see the amazing Grindhouse double-feature Planet Terror/Death Proof? Remember those wicked fake trailers? Remember how fucking ecstatic we all were when we found out that Hobo With a Shotgun and Machete were going to be made into real feature films?

Well, my lovelies, prepare for more excitement! This week, Eli Roth has confirmed that his contribution to the fake Grindhouse trailers, Thanksgiving, is getting the Pinocchio treatment, and will, in fact, become a real boy… uh, film!

John Watts, who is directing Roth’s other faux-trailer-turned-real-movie Clown, will be part of the screenplay writing team, along with Roth himself, Christopher Ford (who wrote the recently opened Robot & Frank) and Jeff Rendell who co-wrote the original script for the Thanksgiving trailer.

The movie is classified as “in development”, so no release date or any other pertinent information has come about, but check back in the coming months, as this is a film we here at Yell! Magazine will be keeping our eyes on.