They’re All Gonna Laugh At You – Or, I Can See Your Dirty Pillows – New Stills From Carrie Remake 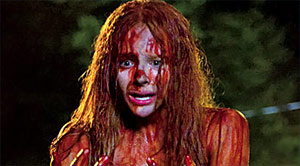 Hot on the heels of another infamous remake now in post-production (yeah, I’m talking about The Evil Dead) and coming at us from MGM and Screen Gems, is another film bound to piss every die-hard Horror fan off: the remake of Stephen King’s Carrie, which is slated to hit theaters in March of 2013. This new remake stars Julianne Moore as Margaret White and Chloe Grace Moretz (Let Me In) as title character Carrie White. And while I’m a big fan of little Chloe and Julianne Moore, I’ve got to ask: REALLY MGM? It wasn’t enough that we had to endure a brutal sequel in ’99, but now another beloved Horror movie is being remade? I swear, if I hear about a Maximum Overdrive remake, I’m hanging up my cape, and skull-capped scepter, and I’m getting the fuck out of the Horror world.

Stills from the movie were released earlier this week, and yes, Julianne Moore looks perfectly religious-fanatic creeptastic in her long, white nightgown, and Moretz is bad ass in blood, but I just can’t help but get a twinge of that I’m-going-to-stab-my-eyes-out feeling going on that always happens to me when I hear of a great flick being remade.

Also, how can someone who’s directed Boys Don’t Cry and an episode of The L-Word, really live up to Stephen King standards?

Anyway, check out the stills, and decide for yourself, my darklings.