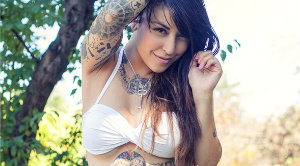 
What constitutes a “favorite” Suicide Girl? Well, she has to meet a few of our standards: She should be fairly heavily tattooed and/or pierced, into one or more of our topics of interest (heavy metal/hardcore rap, horror/sci-fi/action movies, MMA, and/or specific types of video games), and seemingly interesting as a person (as best as we can judge from the brief bio SuicidGirls sends us), and sexy.

And if you want to see these girls in all their sexy glory, join SG via this link.

If Krito Suicide gets any hotter, we’re going to have to start blaming her for global warming. (That’s still a real thing, right?) As you’ll hopefully be able to see from the limited number of pics we’re allowed to show that we put Krito Suicide in captivity – to keep forevermore. Just don’t tap the glass.

Carrina Suicide‘s list of favorite books reads like an Anthony Kiedis source of inspiration. If Carrina said, “Kiss Me Right Here On My Tattoo” (as Kiedis says on “Mellowship Slinky in B Minor”), we’d just have to say, “which one?” Carrina is also into house destruction parties and Irish Whiskey, so we recommend that you don’t invite her over for some Jamesson if you have a sledge hammer lying about.

We wish they all could be California like Carrina Suicide…