John Travolta Rumored To Star In The Toxic Avenger Remake 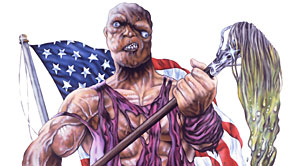 That’s one of the latest rumors in the horror scene that’s spreading wider than a schoolgirl auditioning to star in a Max Hardcore film.

How true is the rumor? Well, nobody knows at the moment. Numerous online sources claim the rumor was first announced over at It’s On the Grid (www.itsonthegrid.com), a website that has the most current database cataloging information on the feature film business.

According to the site, John Travolta is slated to star in The Toxic Avenger remake, and Steve Pink (Hot Tub Time Machine) is at the helm in the directors chair, with co-writer Daniel C. Mitchell. As to who Travolta will play in The Toxic Avenger? That’s still to be determined, once this rumor clears up and goes official. If we get a chance to meet up with Lloyd Kaufman, Troma co-founder, at the 2012 Montreal ComicCon in September, we’ll be sure to question him about it on the spot.

Lastly, Kaufman also appears to serve as one of the producers for The Toxic Avenger remake.

John Travolta Rumored To Star In The Toxic Avenger Remake