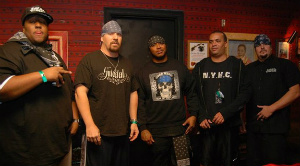 Or burnt at the stake even — or whatever it is we do with witches these days. The reason for their heretic demise? Because this past Sunday, at Heavy MTL 2012, it became more and more apparent to me, as my body involuntarily inched closer to the mosh pit, that within their music Suicidal Tendencies unleash some sort of black magic curse or hypnotizing spell that makes those who witness their demonic power think they are an able-bodied 16-year-old punk rocker again, instead of the nearly twice-that-age punk rocker that they actually are.

And allow me to assure you, darling fiends, that although that may sound like less of a curse and more of a blessing, once Suicidal Tendencies exit stage left, the witnesses are released from their hypnotic state and are almost instantaneously brought back to no-longer-16-year-old punk-rocker reality, which includes aching limbs, bruises in places you no longer knew could bruise, and a terrible sense of getting old.

All of this to say that Suicidal Tendencies rocked the fucking house down at Heavy MTL 2012, and put on a show that reminded me of my younger years. Mike Muir (or if you prefer, Cyco Miko), bounded up and down the stage as circle pits formed and disbanded, and formed again, in the audience; guys and gals braved (and trusted) the grabby, mostly drunken hands of the audience to crowd surf to their favorite songs, and fire hoses were shot mercilessly into the crowd (though whether they were to cool festival goers from the scorching heat or to cleanse the site of the smell of two-day-old dirty, pungy Metalheads is up for debate).

Whether you consider them Thrash, or are right, and like me, consider them Hardcore Punk, Suicidal have been around forever, and no matter what subculture you belong to, chances are you’ve heard of them. If you haven’t heard them, or of them, I implore you to hang up your spiked leather jacket, grab a pair of thick-rimmed glasses, some skinny jeans, and don’t let the door hit your ass on the way to your next Belle & Sebastian concert, you fucking hipster pricks. Also, take those kids who are miming pushing a shopping cart with you. Suicidal Tendencies don’t need no rules, and the rest of us don’t need no hardcore dancing.

Now, just get me a Pepsi, and Stay Scared, kids.