New Trailer For Brandon Cronenberg’s “Antiviral” Picks Up The Pace And It Will Leave You Disturbed! [VIDEO] 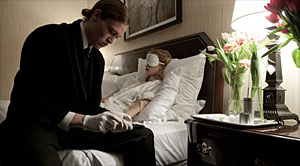 I’ll be honest right here, the first trailer I saw for Brandon Cronenberg’s upcoming sci-fi/thriller, Antiviral, left me uninterested in his feature film debut. It just lacked substance. Sure, it was intended to unveil very little about the film, since it was just a short teaser, and that’s what teasers are all about in the world of Independent cinema, unlike some of the fucks in Hollywood, who sometimes forget the meaning of the word “tease.”

Anyhow, the new trailer for Antiviral goes beyond the point of enigma, and exposes Syd March (Caleb Landry Jones). Sid is employed by a company called Lucas Clinic, which specializes in harvesting diseases from superstar celebrities, and then injecting the diseases into obsessed fans. What’s the reason for this odd commodity? To bring fans closer to their idols. Doesn’t that sound disturbing? I’m even sure David Cronenberg is scratching his head, and saying, “why the hell didn’t I think of that before?” The trailer easily had me jumping out of my chair, and I’m sure it will get your blood curdling too.

Antiviral is currently scheduled to play at the Toronto Film Festival (TIFF) in September.