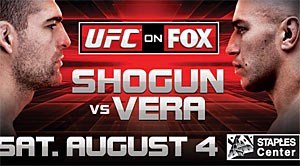 Four of the most dangerous contenders in the light heavyweight division each have the chance to secure a shot at the UFC world title by putting on a devastating performance at UFC On FOX Saturday night (live at 8pm ET/5pm PT).

Then, in the five round main event, one of the greatest of all time, former UFC light heavyweight champion Mauricio “Shogun” Rua, fights on free TV when he throws down with a resurging Brandon “The Truth” Vera.

UFC President Dana White confirmed whichever contender looks the most impressive in victory this Saturday will face the winner of the September 1 Jon Jones vs. Dan Henderson UFC title showdown.

“When the fans speak, we listen. So whoever scores the best win, whoever gets the fans excited by going out there on Saturday and looking the most impressive, he will get the winner of Jones vs. Henderson. It is down to what these four guys do Saturday night in the Octagon. Winning isn’t enough, they’ve got to win impressively. Any one of these four fighters can take things into their own hands and make a title shot happen.”

“I think this fight with Vera is going to be a great fight while it lasts. Vera is a very good striker, and I think this fight will take place standing up and will be a great war for the fans. I know winning isn’t enough; I have to look very impressive and I am planning on a fast knockout like I did against Forrest Griffin. I am not underestimating Vera, he has skills and has a lot to prove, but I have skills and want my title back.

“I want the winner of Jones vs. Henderson. The fight I had with Henderson was a great fight, the fight of the year, and it was a very close fight. I am okay with that, it was a great fight. But the loss to Jones I can’t live with. I could have done so much better and I want to fight him again. First, though, I have to beat Brandon Vera and winning isn’t good enough. I have to be very impressive, but that it what I have trained to do.”

“I’m so ready for this. This is ‘The Truth’ resurging. I feel like I have won the lottery twice, not just fighting a legend like Shogun on FOX, but having the chance to get a title shot. ‘The Truth’ is going to shine though. Shogun is the one who has everything to lose. This is Shogun’s showcase, his spotlight, his time and I’m going to take all that off him. I’m taking his name, his title runs, everything he is, and I’m taking it all for myself.

“The guy is a legend, man. When you fight this guy you’re not just fighting some of the best skills in the world, some champion who can mess you up bad with kicks and knees, you are fighting a sick guy who absolutely will not stop coming after you. Beating Shogun – and beating him the way I want – corrects all the mistakes I’ve made and wipes away all the bad performances. Beating Frank Mir is probably my best performance, but people don’t realize that was nothing compared to what I do all the time in the gym. I’m going to show off what ‘The Truth’ really is on FOX.”

“I respect Ryan Bader very much as a fighter. He will pose some great problems but I believe my training camp has been one of the best of my career. My striking is very sharp, and I’ve worked on my wrestling because Bader is a strong wrestler. I’ve made some radical changes in my training, although karate will always be my main focus. I am getting back on the road to the title. I know what I have to do, and I am ready for this opportunity.”

“This is it, time to show what I can do. I’m better than ever; I used to be just a wrestler with a big overhand right, but I’ve added many more skills to my game now. Fights against Rampage and Brilz have shown my stand-up is a lot more technical and smooth. The win over Rampage felt like the start of a new chapter. After dominating Rampage my confidence went through the roof and I’m now more than happy to face anybody in the light heavyweight division.

“Machida is a former champion but so were three out of my last four opponents. I’m no longer looking at these guys as fighters I used to watch on TV– they’re now my peers, my rivals. Machida is no different. No one is invincible and it is now my time to beat him and go on to a title shot.”