The Tao Of The Hatchet Films: 5 Doctrines You Should Know 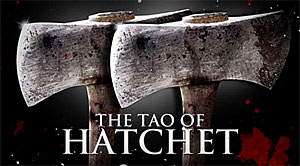 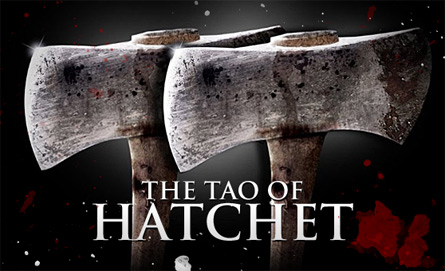 The Tao Of Hatchet: 5 Doctrines You Should Know

I don’t remember the point in history when we decided that, for some reason, blood and nudity was less respectable in horror films than subtle boredom. Some directors, like Ti West, do what critics like to refer to as the “slow burn” well, but if it’s not done with skill, then it’s just me staring at nothing. And if I wanted to stare at nothing, I’d get married and buy 20 front porches. I understand a filmmaker’s need to insert “meaning” into what they do, but sometimes the tea pot over-heating doesn’t necessarily mean anything but the reason that I screamed at my television and ejected the disk.

Thankfully, the Hatchet films have totally got my back on this. If you haven’t seen them, they concern supernatural slasher Victor Crowley, and his constant search for human bodies to rip into pieces. Victor Crowley is a beast of a man, played by Kane Hodder, who you might remember as Jason in Friday the 13th Part VII, Jason Takes Manhattan, that stupid, stupid one, and Jason X.

Now, I could do a standard review of the Hatchet films, but I’m not. Instead, I will do something much more fitting for blood gushing of this caliber. I present to you THE TAO OF HATCHET. These are the doctrines that the series so far has abided by, and trust me, they’re not like your ancient Asian dad’s doctrines. These ones rule.

I’m not a doctorologist, so I don’t know how much blood and organs the human body has in it. From what I remember in 10th grade anatomy, there is a heart, lungs, and the rest of it regulates my pee. The Hatchet films take a lot of liberties with the human body. In Hatchet 2, a man is strangled with his own, rope-like intestines. Medical schools would call this “silly,” but medical schools don’t teach you to appreciate “awesome” in the same way that Adam Green, writer/director of Hatchet 1 and 2, has. 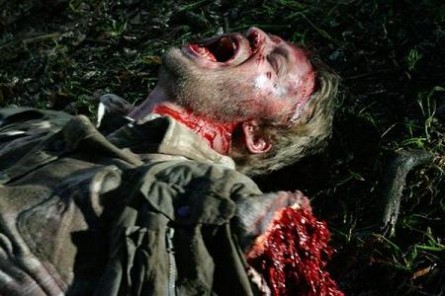 In Hatchet, the human body can explode and tear in a billion different ways. I’ve never had my arms ripped off, but I imagine I’d be what scientists refer to in technical terms as “dead” if it happened. In the world of Hatchet films, having your arms ripped off just allows you to better not stop yourself when you’re slammed into trees and tombstones. Losing your limbs is done for aerodynamic purposes. The human body works way more effectively as a club or torpedo when it’s had extra baggage and limbs separated from it. 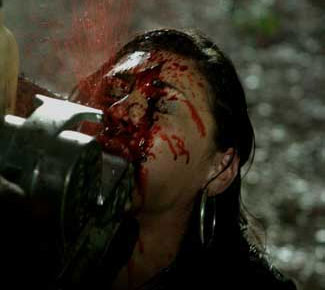 The same goes for your face. I’ve also, thankfully, never had a gas-powered belt sander pressed against my jaw until I looked like an extra from a Pet Sematary musical. But, in Hatchet, this minor abrasion doesn’t stop you from living a little while longer, mainly for the purpose of disgusting your friends who still have their faces intact. In Hatchet, the human body lasts as long as it takes to freak out everyone around you. Only after that can you get lazy and die. 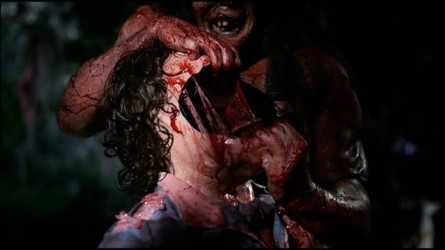 Hatchet film Doctrine 2: In The Case Of Weapons, Where There’s A Will, There’s A Way

As you might decipher from the title of the movie, Victor Crowley’s favorite weapon is a hatchet. It’s easy to carry, and perfect for ridding someone of their pesky torso. However, aside from hacking and the occasional throwing kill, a hatchet can only go so far. It’s only due to aesthetics that the film is called Hatchet. A more appropriate title would be HATCHET BARE HANDS BELT SANDER SHOVEL CHAINSAW PROPELLER AND MORE! 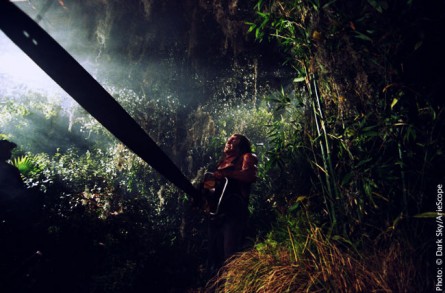 In the world of Hatchet films, one can buy an eight-foot chainsaw. I imagine that the conversation with the Lowes salesman before the purchase would go like this:

Buyer: I would like to buy this massive chainsaw. GRAAAR. Don’t stare at the wound on my face, please.

Salesman: Well, despite your elephant head and overalls, I think you’re perfectly fit for buying this outrageously huge death instrument.

An eight-foot chainsaw would probably break apart in real life, in the same way that people argue against dinosaurs by saying they’re just too big for their own spines to support. In Hatchet, though, it stays together, and can even lift up two grown men by the groins to saw them in half. And that, kids, is the magic of cinema. 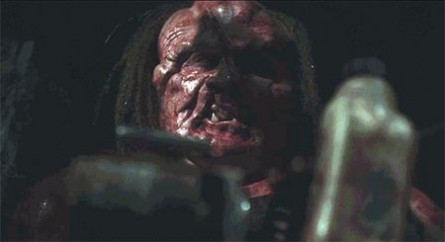 Also, the aforementioned belt sander. I’ve seen the special features on my Hatchet disc, and apparently, a gas powered belt sander didn’t exist before Hatchet. The fact that it didn’t exist though wasn’t enough to stop workshop sorcery, and thus, one was invented for the sole purpose of removing a girl’s minor chin blemish, her chin.

Anything can be a weapon in Hatchet. You just have to believe in yourself.

Hatchet film Doctrine 3: There Is No Room For Mercy (Stay Out Of The Swamp)

I don’t know who decided that when faced with a family member or loved one, people like Michael Myers or Jason Voorhees would suddenly become docile. I tried to contact the companies that currently employ these people, but they were all too busy at the 2012 Hand Holding and Letting A Girl Braid Your Hair Ironically/Shamefully Convention to be reached for comment. 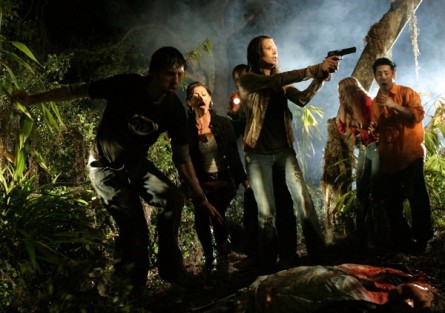 In Hatchet, Victor kills pretty indiscriminately. We know that he loved his dad, but since his dad is dead, there’s really no one with any close ties to him. So, if you enter the swamp, you’re going to be torn apart. Swamp boat riders, hunting parties, alligator poachers, it’s all the same to Victor. One might say that his methods lack focus, but the only thing Crowley needs to focus on is where to place his boot when he’s curb stomping someone’s head on a table. I can do nothing but appreciate this bold approach to hatchet’ing.