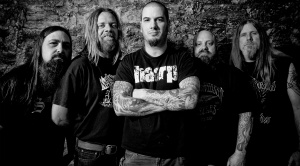 Down, led by former Pantera frontman Phil Anselmo, have released a new song off of their forthcoming EP, Down IV Part I – The Purple EP.

Yeah, you have to stream “Witchtripper” from RollingStone.com. Do so – NOW!

As you’ll note, “Witchtripper” is a heavy, mid-tempo track that is very much a Down track, and not at all far removed from a Black Sabbath vibe. Fans may or may not be disappointed to see that Rex Brown is absent from the lineup. Pat Bruders (Goatwhore) has stepped in, and you can hear his style of play on “Witchtripper.” I’m not complaining; he has a great sound.

Phil was originally opposed to titling a song “Witchripper” when it was initially suggested to him. However, upon hearing what guitarist Pepper Keenan and drummer Jimmy Bower had come up with musically, Phil decided to give it a shot, stating:

“I was like, ‘OK, check this out, you dicks. ‘Witchtripper’ you want, ‘Witchtripper’ you will get.’ …I laid it on them, and sure enough, they were right – it worked, as usual. So there goes the genius of Phil Anselmo. Always doubting, and I’m the last one to get it.”

Down IV Part I – The Purple EP is scheduled for release September 18, 2012, and it will be the first of a four-part series of EPs. With full-length albums becoming less important, this could prove to be a trend in the industry – shorter albums, more frequently.

Down also kicks off a new tour on September 18th, in Fort Worth, Texas.

Let us know what you think of the track in the comments section below.