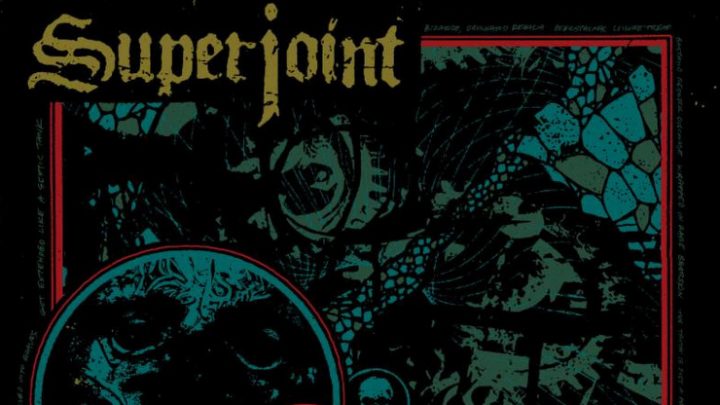 Mitchell’s idea worked brilliantly, as the band members found true joy in playing together again. After just two tours, new material followed, culminating in the scathing sounds of Caught Up in the Gears of Application.

Set for release on November 11, 2016, via Anselmo’s own Housecore Records, Caught Up in the Gears of Application was captured at Nodferatu’s Lair and marks the band’s first new output since 2003’s critically lauded Lethal Dose of American Hatred. Produced by Anselmo and Stephen Berrigan (Down, Philip H. Anselmo & The Illegals, Eyehategod, Haarp, Classhole etc.) and mastered by Scott Hull (Agoraphobic Nosebleed, Pig Destroyer) at Visceral Sounds, Caught Up in the Gears of Application remains true to Superjoint’s original strategy: to spew forth an acrimonious crossover of hardcore punk, metal, and unrelenting, hostile, New Orleans-style angst.

The minute we started writing, I knew this record would be brutal. Sticking to our true hardcore roots and signature Superjoint sound, we accomplished a record that needed to happen in today’s underground. It’s pissed off! After being on hiatus for 11-plus years, the chance at a new Superjoint record wasn’t something we took lightly. With newcomers Steven and Joey, we were psyched and eager to get in the Lair and start writing and after two tours with the new lineup, we were able to hit the writing hard! Didn’t take long to accomplish, and we stood and smirked at the playback of what would be the new Superjoint record. With songs like ‘Receiving No Answer to the Knock’ and ‘Sociopathic Herd Delusion’ we had everything to smirk about! This record brings our vicious style of hardcore back to life. Pissed off with everything to prove, Superjoint is back!

Adds Anselmo of the offering:

The overall theme means many things, or no things, but there is an underlying message regardless, about how modern technology — computers and all that comes with them, mainly — has affected our lives. As a musician, it has affected my life both negatively (music being stolen) and positively (being in touch with fellow musicians around the world and staying visible). But when looking at the broader spectrum, computer-land has given everyday people a platform in which to bellow like carnival barkers about anything and everything, humdrum or political, whether qualified or not, some with good intentions, some with disingenuous intentions, and some with ideas that lay somewhere in the middle, creating a mishmash of results.

As a precursor to the release of Caught Up in the Gears of Application, revolvermag.com has offered up the confrontational “Sociopathic Herd Delusion,” for communal ingestion. Issues Anselmo simply:

‘Sociopathic Herd Delusion’ is an absolute Superjoint hook-a-rama done in 1,000% Superjoint form! It’s a state of cerebral address, and thicker than a 100-year-old deck of collectible boxing cards.

Pre-order bundles for Superjoint’s Caught Up in the Gears of Application are available via the Housecore Store here.

Superjoint will bring their venom to the stage for their official record release show on November 12th, in Dallas, with future onstage abrasions to be announced in the coming weeks.