Lollipop Chainsaw Review: “As Fate Would Have It…” 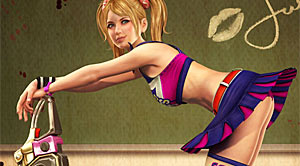 It’s not easy being 18. You gotta balance out your rose-colored high school life with the strict-but-offbeat regimen that is your home life. On top of that, your boyfriend has just become a severed head, kept alive with a special strain of voodoo-esque witchcraft. To make matters worse, the town is overrun by zombies, who’ve eaten the brains of the majority of your friends. Still, you find solace in the fact that you come from a historical bloodline of zombie hunters, and your immediate family’s totally got your back. Equipped with a chainsaw (complete with cellphone attachment), you take to the streets to save your one true love – even if he does spend most of his time complaining.

If you just did a frantic backflip out of your chair, congrats, you will enjoy this tonally confused masterpiece. If, instead, you managed to grimace and wonder exactly why anyone would want to assemble the components that compose the preceding paragraph, then you might as well stop reading here. Lollipop Chainsaw is sadly, not for you. Go to the kitchen and make yourself a piece of plain toast instead.

Now, I admit: I’m totally partial to this game, and was waiting with anticipation for its release, both for personal reasons and for writing this Lollipop Chainsaw review. I knew exactly what I was getting into, and because of it, not only was I left satisfied, but my expectations were surpassed.

Mainly because I knew to turn a blind eye to the gameplay.

See, Suda 51 is the type of guy whom you either get, or you don’t. His games all bear the stamp of being irreverent, original, and laugh-out-loud absurd. Naturally, the strangely effusive amount of hype this game garnered had managed to place presentation at the forefront of its advertising. What lurked in the background, however – the gameplay – is best taken with a grain of salt.

Now, that’s not to say that Lollipop Chainsaw is bad as a game, mind you, but it’s just got a forgettable gameplay experience. The game itself isn’t forgettable – it’s just that it carries the same flighty hack-and-slash motif that we’ve been dealt every year since Devil May Cry.

You move from room to room, partake in the occasional minigame, and basically clear out hordes of zombies with your mildly versatile chainsaw. Along the way, you pick up new moves, and health upgrades, and at the end of the level, you go mano-a-mano in intrinsically interesting but particularly easy boss battles.

It plays like (and mostly evokes) No More Heroes – its graphic style almost entirely lifted from its port to PS3. It boasts one of the most bright and colorful palettes seen in the last decade, and it’s a nice break from the today’s average title that’s laden with a dreary 69 shades of gray. Lollipop Chainsaw definitely looks nice, but it’s worth mentioning that the presentation itself lacks polish. The character models don’t emote very well (which is a pity, considering the dialogue is some of the best we’ve heard in a long time) and the physics engine is distractedly awkward during certain cutscenes.

Continue reading the Lollipop Chainsaw review, and get the verdict after the jump…