UFC 148: Patrick Côté Is Ready For Cung Le In The Biggest Fight Night Of The Year [VIDEO] 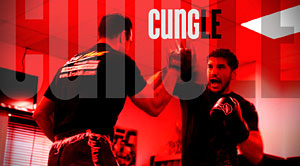 A recurring problem the UFC has been facing lately is top-tier fighters, including Champions, pulling out of a fight because of injuries related to excessive training. Just this year alone the promotion gorilla was plagued by this problem as it was forced to replace Dominick Cruz, Vitor Belfort, and Georges St-Pierre weeks prior to their respective main events.

Could it be that the UFC is simply putting too much pressure on fighters to give the fans “the BIG show”? Nowadays it isn’t only about winning. Winning is key, that’s a given, but an exciting fight brings in the ratings. If it’s a boring show, chances are the boss will point it out in the post conference, and you better get your ass in line for the next fight.

On the other hand, this isn’t all that negative either: It gives an anxious fighter the opportunity to step inside the Octagon on short notice, take the risk, and get the chance of a lifetime to move up the ranks faster and grab the belt from the defending champion. This somewhat happens to be the case for MMA vet Patrick “The Predator” Côté, who last appeared on the UFC prelims for UFC 121: Lesnar vs. Velasquez, and lost via unanimous decision to Tom Lawlor back in 2010. Forcing Côté to hang up his gloves in the UFC.

Rich Franklin was originally scheduled to fight Cung Le for UFC 148, but replaced Vitor Belfort (due to a broken hand) at UFC 147 to take on Wanderlei Silva for the second time, winning both fights.

July 7th is a win-win situation for Patrick Côté. First, he fights on the biggest UFC card of the year, thanks to Chael Sonnen for hyping it up for two years. Second, it’s a huge fight against former STRIKEFORCE Middleweight Champion, Cung Le. Winning this fight will obviously get his name in the spotlight, and if he pulls off an impressive win like at Amazon Forest Combat 2 (defeating Gustavo Machado in 2 minutes, 44 seconds by knockout) could get him that much closer to a shot for the strap.

But all of this isn’t a surprise for Côté who’s a full-time fighter that hasn’t stepped away from the cage since his loss in the UFC. He’s recently won four consecutive fights, trained hard, and waited patiently for the call from Dana White.

“I was waiting for a late replacement like that, but I wasn’t expecting to be in a big fight like that right away. But I’m really happy.”

During Côté’s media workout session for UFC 148 at the BTT Gym in Montreal (video preview above), the 32-year-old left us impressed on the mat by demonstrating his standup, cardio, and a-level ground work. After training with high caliber wrestlers, it’s clear that Côté has the confidence and is ready to face Cung Le. Côté stated the key for success with his opponent is to stay in tight regardless of Le’s striking abilities, and finish the fight his way.

In just a week’s time, be sure you tune in for UFC 148: Silva vs. Sonnen II to catch Patrick Côté’s return to the UFC, and it should be an exciting one.