Jennifer Lawrence Is Looking Sexy In The Wife-Beater 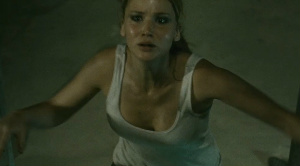 So, yes, the title of this bit is true, but as I’ve said before, House at the End of the Street looks fucking terrifying. Even if my prediction that it’s a Psycho/Norman Bates-type of film, it’s still going to be badass.

Check out the extended trailer and let us know your thoughts – whether you think it’ll be a good flick, a shitty flick, or if you think Jennifer Lawrence has a shot at being the next scream queen.

And for the record, a bottle of chloroform, in a box, in a glove box, in a garage, of the house where murders occurred is a bad sign. It’s a sign to get the hell out.

Related Items: House at the End of the StreetJennifer Lawrence