Zombies Vs. Gladiators – Clive Barker Tapped To Rewrite It 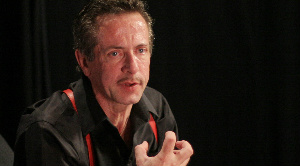 Usually it’s a pretty bad omen when “Vs.” is in the title of your movie, but that might change very shortly.

Amazon Studios (the filmmaking branch of Amazon.com) has tapped Clive Barker’s shoulder and asked him to rewrite Zombies Vs. Gladiators. There have been very few zombie undertakings that have brought some originality to the genre, Dead Girl comes to mind, and here at Yell! Magazine we’re hoping Barker has the chops to do so here.

Considering Clive Barker’s work, Amazon Studios has made a wise choice in selecting him. His catalog is rife with horror classics, such as Hellraiser, Nightbreed, Midnight Meat Train, and Candyman, just to name a few.

Don’t forget: Hellraiser, coming to a TV near you. Keep coming back to Yell! Magazine for updates on the Hellraiser TV project.

Zombies are hugely popular and, well, the last time gladiators were popular was when Ridley Scott did Gladiator. So, combining the two might seem a bit unnatural, but, c’mon, it’s gonna make for some fun and bloody action/horror. Zombies Vs. Gladiators will be set in ancient Rome. A shaman, who’s about to die in the Colosseum, casts a spell to unleash the world of the undead. Then it’s up to a gladiator to stop the zombie horde from spreading.

Of the Zombies Vs. Gladiators project, Barker had this to say:

“I’m excited by the opportunity to interweave two very rich narrative threads. One of them concerns itself with the reality of the decadence of Rome and its rise and fall. The other is a fantastical narrative element: the living dead. My brief to myself on this project is to give the audience not only zombies they have never seen before but also a Rome they have never seen before.”

Zombies Vs. Gladiators is currently slated for a 2014 release.