Top 10: Defining Moments Of My 10 Favorite Fighters In MMA 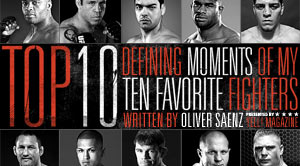 No.5 Anthony Pettis: Leaning Back So Far In My Chair It Cracked

I had the privilege of watching Anthony Pettis fight Benson Henderson with my best friend, and the reaction we both had to the famous “Showtime Kick” is something I’ll probably never forget.

When it happened, I leaned back in my chair in shock, as if my brain could not accept the awesomeness it had just seen and was in the beginning stages of making my body move away in fear. I ended up leaning so far back in my chair that I heard a noticeable crack. Meanwhile, my friend was shouting, “What he hell was that?!” at the top of his lungs.

I’ve always been a fan of Forrest Griffin. I love a good underdog story, and Griffin’s has been one of the best underdog stories in the history of MMA.

Here’s a little backstory for you: back when PRIDE FC was the be-all and end-all, I was a staunch UFC fan and always defended the UFC’s fighters when the inevitable “PRIDE vs. UFC” debate started and the legions of PRIDE fans would claim how anyone from PRIDE could immediately come into the UFC and run roughshod over the competition.

At least in my opinion, this debate reached its ultimate conclusion when Mauricio Rua fought Forrest Griffin.

It wasn’t supposed to be this way, oh no. “Shogun” was supposed to make quick work of Griffin before heading straight into a title shot. Griffin was a sacrificial lamb being tossed to a wolf that would devour him quickly and remorselessly.

Instead, Griffin would choke out Rua after three rounds of breaking him down. Immediately after the choke, Griffin would run across the ring with a big, dumb smile on his face with his hands held wide.

I did the same thing. I’m not kidding: I had the same dumb smile as I ran up and down my house with my hands in the air. Like in the case of Lyoto Machida, it was one of the most vindicating moments I have ever experienced as an MMA fan. And it’s something I’ll never, ever forget.

To just pick one moment out of Fedor Emelianenko’s career almost feels like a disservice to the man, but this is my moment. As both a Fedor fan and an Arlovski fan, I was eagerly anticipating this match-up. Arlovski was right in the middle of a big comeback at the time, remember.

Maybe I bought into the hype a little too much, but back in the day I thought that Andrei Arlovski was one of the last big challenges remaining for Fedor Emelianenko.

Emelianenko’s KO of Arlovski was one of the most cringe-inducing knockouts I’ve ever seen. To put things into perspective: I may not be the infamous “Just Bleed” guy, but I love when a fight ends epically and most of the time (at least in the heat of the moment) I don’t really mind if an arm gets broken or a guy gets pummeled or somebody bleeds like a faucet so long as I get my can’t-miss moment.

I say all that to say this: this was one of only a handful of times when I immediately wondered about the safety of the fighter that just got knocked out instead of enjoying the fact that I had just seen an epic knockout.

And believe me, I still remember how I felt: shaking my head in awe at Fedor’s talent while hoping that Arlovski wasn’t as dead as he looked.

No.2 Brock Lesnar: I Started Throwing Random Things Around My Room

You can hate on this all you want, but here it is: the second-strongest reaction I have ever had to the outcome of an MMA fight. I’ve been a fan of Brock Lesnar since the first time I saw him in the WWE, back when I was a hardcore wrestling fan. As a quick tangent to help better paint a picture of how big of a fan of pro wrestling I used to be, consider this: I used to get paid to review wrestling DVD’s… in the form of more wrestling DVD’s.

When Lesnar returned from his long layoff due to injury and was nearly pounded into jelly by Shane Carwin, I felt incredibly dejected. I had no hope that Lesnar would somehow rally, in my mind, how could he? Carwin dominated Lesnar like no one had ever dominated Lesnar before, and I felt sure that the end was near heading into the second round.

Then Lesnar snuck in a takedown, turned it into a submission attempt, and actually submitted Shane Carwin.

My memory of this moment is as crystal-clear as anything: I remember hope coming back into my head as Lesnar took Carwin down. I remember how shocked I was when Lesnar achieved mount so easily. I remember how bewildered I was at the notion of Brock Lesnar, Brock freaking Lesnar, submitting somebody. I remember my jaw hitting the floor as Shane Carwin’s head starting to turn purple.

And I definitely remember my reaction when Carwin tapped out: I literally jumped out of my chair, started cheering, and started tossing things around my room. I didn’t know what else to do.

Don’t take this the wrong way: it’s not like I was breaking things or putting holes in my walls or attempting to break the sound barrier every time I tossed something. But I distinctly remember a stack of papers I sent flying because… well, because it felt like the right thing to do at the time. My remote, mouse, and keyboard may have been thrown in the air and left to plummet as well. It was one of those moments where I literally couldn’t contain myself.

In hindsight, I know how crazy this makes me sound, and I know that it’s probably not something I should share with anybody if I want them to take me seriously. But this is my love for the sport: It makes me do some pretty crazy things. This was definitely me at my craziest, but the Number 1 spot has got to go to…

No.1 Anderson Silva: I Ran Up and Down My House Screaming “YES!”

If there was ever an occasion where the phrase “loud enough to wake the dead” could describe me, it would be my reaction when Anderson Silva submitted Chael Sonnen in the fifth and final round of their fight.

I don’t really think anything I write down here could do justice to what I felt at that moment. This was my favorite fighter – ever. Anderson Silva is one of the reasons I got into the sport of Mixed Martial Arts. The first piece of MMA memorabilia I ever bought in my entire life was an Anderson Silva shirt.

To put it plainly: before I was anything in MMA, before I knew anything about MMA, I was an Anderson Silva fan.

So, when Silva pulled off that miracle against Sonnen, I did what I felt was right to do: I ran up and down my house screaming “YES!” to the point where I nearly lost my voice and had a sore throat for almost a week.

It was the most amazing moment I’ve ever experienced as an MMA fan, and above all else, this is the moment I point to and try to describe when anybody, whether they be a newbie or a naysayer or anything, asks me why I love this sport so much.

And that’s it! Those are the moments I’ll never forget. Feel free to leave your own, because regardless of how embarrassing they might be, I think I’ve got you beat. But who knows? And remember: despite all the crap that constantly tries to bring this sport down, Mixed Martial Arts is amazing. Never forget that, and never forget that as fans, we owe it to ourselves to remember the good times any time a scandal or story threatens to bring us down.