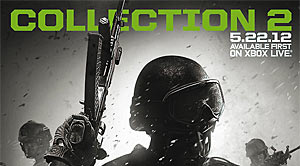 – Getaway: This former white-sand vacation spot, boasting exotic aquaria and surfside infinity pools, is now a Face Off map and a haven for ruthless run-and-gun violence.

– Lookout: A perilous warren of chokepoints and tight corridors, the second Face Off map drops your one- or two-man teams into a forward observation base carved into a war-torn mountainside.

– Sanctuary: Destroy the opposition—and the ornate relics of an ancient monastic order—in the towering sandstone cloister of central Greece’s Sanctuary. SMGs, assault rifles and shotguns will make short work of both.

– Foundation: Choose your rules of engagement in this decommissioned cement factory in the heart of South Korea, perfectly constructed for both sniping and run-and-gun combat.

– Kill Switch: Armed with an EMP, you and a squad mate must neutralize a Russian carrier deep within enemy territory. This Special Ops Mission tasks one team member on the ground, fighting through hostiles on your way to the detonation site, while the other must maintain vital cover from behind a sniper scope.

– Iron Clad: For the first time, take the wheel of an Abrams-class tank with full escort. Breach and clear and exfiltrate from behind enemy lines in Hamburg in this all-new Special Ops mission.

To celebrate the launch of Call of Duty: Modern Warfare 3 Content Collection #2, Activision is putting basketball superstars Brandon Jennings of the Milwaukee Bucks against Gordon Hayward of the Utah Jazz head to head in a Face Off Challenge, a special edition of the Call of Duty Grudge Match for ultimate bragging rights. Jennings and Hayward will captain teams featuring development studio members, online personalities and Call of Duty: Modern Warfare 3 fans in an intense battle before settling the final score in the all new Face Off. Gamers can review Grudge Match highlights on the Modern Warfare 3 Facebook page.