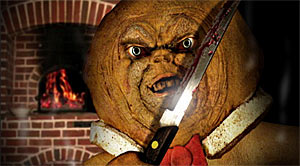 Sometimes the simplest concepts are the most effective ones. Case in point: imagine a world where Gary Busey is a homicidal maniac. Not too much of a stretch, right? With that gravelly voice and manic personality, I wouldn’t bat an eye if someone informed me Scary Gary murdered 16 civilians, 3 cops, and a Predator in the middle of a black-ops drug deal gone wrong. Quite the contrary – it would just prove my theory that Busey has always been playing himself and all of his films were just loosely autobiographical portraits of his coked-up, everyday adventures.

Knife fight with Mel Gibson on Danny Glover’s front lawn? Yep, that was a Friday. Got into a fire fight with a bunch of ex-President masked surfer crooks outside an airplane hanger? Sounds like a normal Tuesday afternoon to me. Was killed during a diner robbery only to have his soul implanted into the golden brown crusted body of a cookie confection? That… actually, that sounds like a bit of a stretch. This is the conceit of Charles Band’s 2005 direct-to-video opus (does he have any other kind?) Gingerdead Man. Gary Busey is a killer cookie in the vein of your usual killer doll, leprechaun, or sweater-clad pedophile. He cracks wise, confines himself to a bakery, and gives a group of young bakers their (don’t do it) just desserts (I am a horrible writer).

It wasn’t an amazing film. It didn’t change the horror game. It will never be uttered in the same conversation as a Saw or Paranormal Activity. But it was funny as shit. It had to be. Gary Busey has long been an actor that occupies the same sort of kooky, unpredictable arenas as Christopher Walken and Nick Nolte. He’s scary and crazy but in a hilarious, loveable sort of way, filling the void in audience’s hearts as the alcoholic uncle/drug runner/Predator-hunting FBI agent you never had, but always prayed to God for, night after night. As such, the film was a slam-dunk without even trying. Such is the genius of Charles Band as a producer – take Busey and have him voice a killer cookie and watch the Blockbuster invoice orders stack up.

With a hilarious trailer and a lot of Internet buzz among the “so-bad-its-good” set, it was a success before it even hit shelves. Nevermind the fact that it was barely over an hour in length (with a little help from 10 minutes worth of credits), never mind the fact that Busey is only actually in the movie for what could be considered a cameo’s length, never mind the fact the film moves at a snail’s pace, never mind – you know what? Just never mind. Gingerdead Man was a critic-proof gift from the gods of bad cinema. Of course, a sequel was inevitable. Which brings us to Gingerdead Man 2: Passion of the Crust. Yes, it’s a pun on the Gibson film… released four years after the film was in any way relevant, but Christian controversy moves DVDs, dammit. Not like Garey Busey in cookie form, mind you. This brings us to Gingerdead Man 2’s greatest problem: a lack of confectionary Busey. I’m guessing ol’ Gar’ asked for a bigger paycheck or something, because he does not return to the character he made iconic (though he does pop up in stock footage from the first film).

Instead, producer/special effects guru John Vulich goes all triple duty on everyone’s asses with his own spin on the character. While he does an admirable job, the hubris of trying to trick fans of the cookie killer with False Busey is deplorable, abominable, and kind of distracting. It just isn’t the same without the real deal, Scary Gary. It’s like trying to do a Hellraiser without Doug Bradley. No one in their right mind would do such a thing to such a beloved franchise. Well (besides the Weinstein company), no one but Full Moon mogul Chuck Band and Gingerdead Man co-creator William Butler. See, this isn’t their first diminutive terror rodeo. With Busey out of the picture and Vulich giving it his college try, the duo teamed up with screenwiters Aaron Strongoni and Muffy Bolding (these are actual names, I swear to God) to make… an actual movie? Yup. Without Busey to carry the film with novelty alone, Gingerdead Man 2 is forced to resort to such tactics as clever screenwriting, funny jokes, and strong direction to make ends meet. This may come as a shock to fans of the original. I know it did me.

But what a great surprise! I’m usually content to settle with a rod puppet killing off beautiful actors/models/cocktail waitresses (triple threat thespians) in ridiculous, poorly CGI’d set pieces. With Gingerdead Man 2 gritting its saccharine teeth and crafting itself into what is surely the first and last word in dessert-themed horror films (eat it, The Stuff) I barely know what to do with myself. You know, besides shower it with praise.

[Editor’s note: Maybe not horror, but certainly terrifying. There was a memorable pastry scene in 1985’s Young Sherlock Holmes.]

The film is a big fat love letter to hardcore Full Moon/Charles Band fans, the ones who stuck with the company from the Empire days through the Tempe partnership and beyond. Much like Joe Dante’s Gremlins 2, it is a film that mocks its own inception and branding. It’s not quite as family friendly, mind you, but the comparisons are there. Continue reading The Gingerdead Man Trilogy article after the jump…