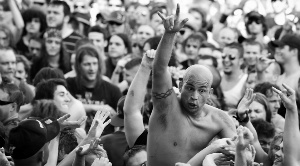 The perennial metal festival in Montreal, Quebec, Canada since 2008 (skipping 2009 because too many metal acts rolled through the city the previous year – WTF?), Heavy MTL already had a killer lineup slated for 2012. But, the metal gods are smiling upon the French-speaking city and blessed them with more bands.

Added to the bill are Deftones, Dethklok, Voivod, Trivium, Emmure, Sword, Dance Laury Dance and Diemonds. Seriously, for signing on late, there are some serious bands being added. Each year, Yell! Magazine goes to Heavy MTL and each year it seems to get bigger and better bands. We only hope the locals and others like us make the trek to keep this annual event around for a very long time.

Check out the rest of the Heavy MTL 2012 lineup.

Heavy MTL has a sister in Toronto, a copycat of sorts, and it’s called Heavy TO. Not quite as catchy. Nice try though. Both fests, however, are a combination of two fests in the U.S., the Mayhem Festival and Summer Slaughter tours. So, who’s getting the better deal?