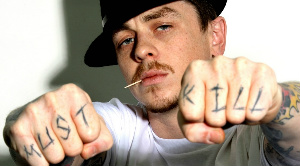 Sid Wilson (aka, #0/ DJ Starscream) has announced the addition of new dates on his current solo tour the Miami Vice Sound Crack Tour, which sees Wilson playing a dual role as both a Dub Step DJ and solo artist, getting out from behind the decks mid-act and performing his unique style of music that Wilson terms “Digipunk.”

In 2011, Wilson released his debut solo album SID as well as an album with TheKeenOne, entitled Keen X Sid Repeat, tracks from which make up part of the set list for the Miami Vice Sound Crack Tour. The tour also includes TheKeenOne, or Keen as she’s nowadays better known, performing alongside Sid Wilson and Jamazz, an Omaha, Nebraska-based rapper who is featured on both albums and recently released his own solo album, Brilliance Dynamic Neon, all of which are available on iTunes.

The tour runs from April through to June where American Head Charge and Blue Felix will be added to the bill for some of the run, until preparations begin for Mayhem Festival, which will see Wilson not only behind the decks with the legendary Slipknot for the summer, but also doing double duty with solo performances during the day at Mayhem and DJing at after-parties at night.

Wilson is also promoting his new clothing line Killa Clothing while out on tour and recently collaborated on an EP with Limp Bizkit’s Fred Durst and Wes Borland. MIAMI VICE SOUND CRACK Tour dates are listed below with more dates TBA: