Suicide Silence Go With Zombies In “Slaves To Substance” [Video] 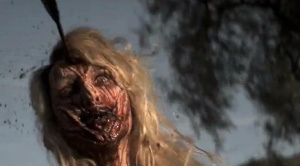 Yell! Magazine loves zombies. Seriously, check out our archives for The Walking Dead and our 10 Zombies With Killer Character article.

So, when we came across the new Suicide Silence video for “Slaves to Substance,” from The Black Crown, we felt we had to share our enthusiasm with our Yellers. The video’s run time is just under four minutes and it views like a very short film, complete with three acts – and there might be more zombies and killings in it than in the entire Season 2 of The Walking Dead. It’s a fantastically horrific video with violent killings, spilled blood, and some gore sound effects. It’s no surprise that it’s a good video though, since famed metal music video director, Nathan “Karma” Cox, was at the helm.

In Act 1 we’re introduced to our central protagonist, a young boy holed up in his basement about to cut his own hair. He’s interrupted by a perimeter bell, alerting him to a breach. He quickly gets dressed and with his bow he summarily disposes of an intruding zombie.

In Act 2 he meets a girl. They establish a relationship. She gets bit. He shoots her.

“Slaves to Substance” is a good song too. The track is heavy and there is a nice arpeggio solo toward the end. Well worth a listen even without the video.