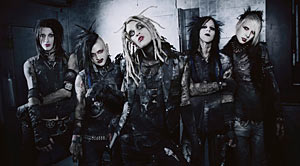 Hollywood, California – Standby Records is pleased to announce the further growth of their “Rock N’ Roll 2.0” roster with the addition of Hollywood based industrial/rock band Davey Suicide and the May 1st premiere of their “Generation Fuck Star” video on Blank TV.

“My predecessors went indie first and it felt like it’s right thing to do. Sometimes, the hardest thing to do is to find the team that believes in what you do” said lead singer, Davey. “It spoke volumes to me when Standby and my management said, ‘fuck yeah, lets make Generation Fuck Star the first track.’ In my life, I’ve had many instances where the industry has told me, ‘no.’ This instance was the first of many that confirmed, to me, that this team shared my vision.”

Said Neil Sheehan, owner of Standby Records, of the collaboration:

“What made the first incarnation of Rock N’ Roll tick was how it connected with the youth while
rebelling against the older generation’s antiquated perceptions of how things should be. As we further the progress of Rock N’ Roll 2.0, we couldn’t do it better than working with a visionary of youthful rebellion like Davey Suicide. Some will call him a shock rocker…those that ignore the problems of today’s generation and think that old fashion ideals and visions are the only way the world works. Davey Suicide is the embodiment of something new. He’s not shocking. He’s right. We couldn’t be happier to work with an artist with this sense of vision.”

This partnership has given Davey the freedom to realize his creative vision without limitations. On their music and motivation, Davey said, “What makes art and music special is that we don’t have to have boundaries. They’re only there because we put them there. My music is the epitome of what happens when you throw your scripts out the window and anything goes.” ‘Generation Fuck Star’ will be released on iTunes on May 1st, with the video premiere airing on Blank TV the same day. You can catch an exclusive first look at the visual & audio chaos via Bloody Disgusting on Tuesday, April 24th at noon EST. When describing the single, Davey stated,

“Generation Fuck Star is about breaking the mold, doing what you want, how you want, and not because you are told to be a certain way. The consumer can see through the cookie cutter bands and that’s why their love for those bands is fleeting. Give them music that means something and they’ll stand by your side, forever. Another label wanted to sign me but they were too scared to release Generation Fuck Star as my first single. That proved to me, they weren’t avant garde enough.”

Directed by renown photographer and filmmaker Chad Michael Ward, it promises to be ”the breath of fresh air that music fans need”, as stated on Davey Suidice’s Facebook page. Chad Michael Ward is best known for his work with such artists as Marilyn Manson, Fear Factory, and Black Veil Brides as well as his stunning fashion and portrait portfolio.