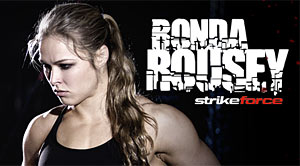 It certainly feels weird to say this, but I now consider myself a fan of Ronda Rousey. This isn’t the first time I’ve gone from completely loathing a fighter to considering myself a fan, but it’s honestly a very rare occasion for me. The biggest example of this has been my stance on Nick Diaz throughout the years, and in an interesting way, Rousey reminds me a lot of Diaz in several different ways. But most importantly, the reason I’m switching stances on Rousey closely mirrors the reason I switched stances on Diaz: hate all you want, but you have to respect the skill.

Think about that for a second: how many times in any other major sport do hot prospects come in with all eyes on them and… they get smacked down? In MMA’s case they literally get smacked down. It’s one of the most interesting facets of the game, at least to me. We live in a world of “you’re only as good as your next fight” and “what have you done for me lately?”

In MMA, it’s not about proving your hype… it’s about living your hype. You don’t get to have one awesome performance and then all of a sudden you’ve realized your potential. It just doesn’t work that way.

And you know what? I wouldn’t have it any other way.

So, am I saying that Ronda Rousey has proved her hype? No. The reason I’ve become a fan of Rousey is because she’s living her hype. So at this point you have to consider Ronda Rousey the face of Women’s MMA.

Like Gina Carano, her looks are turning a lot of heads. But once you think about it, you begin to realize that Rousey is so much more of a complete package than Gina.

Without any disrespect intended towards Ms. Carano, looks were pretty much the only thing she had going for her. She did good against decent (some would just say bad) competition, and bad against good competition. Her interviews were simply painful to listen to, always giving half-answers in hushed tones.

But let’s stop the hype train for a second: Ronda Rousey still has a long way to go. She needs to continue to live the hype, day in and day out, in order to continue to be the Face of Women’s MMA. But me, personally? I never hated Rousey so much that it would’ve taken years of proving herself as a champion to have finally made me a fan.

In all honesty, it only took one fight.

Don’t judge me! I’ve always had a thing for “bad boy” fighters, so of course I’d have a thing for “bad girl” fighters. It’s a “hate to love” thing, which goes back to the title of this article. To a greater extent, I love the fact that Rousey is getting so much hate, because at this stage in the development of Women’s MMA, any publicity is better than no publicity.

On a more personal level, Ronda Rousey has proven herself to be a big enough badass that I can’t help but call myself a fan.

So while there’s still plenty to be proven and many fights to be fought… I am now a Ronda Rousey fan. That’s my little confession for the day.