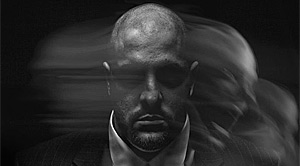 Michigan rhymer Prozak is gearing up for the release of his new album, Paranormal, on April 24th, 2012 via Tech N9ne’s Strange Music. For the album Prozak collaborated with Sid Wilson from the Grammy Award winning metal outfit Slipknot, on the track “End Of Us”.

As he demonstrated on his last collection, 2008’s Tales From The Sick, which earned a lofty 3.5 Mics in The Source, Prozak is one of rap’s most diverse, talented artists. His versatile style combines elements of rock and hip-hop, with a commanding sense of storytelling and a conscious social message underlining it all.

That also makes Prozak being on Strange Music — the No. 1 independent rap label in the world — a natural fit. The Saginaw, Michigan-based artist has embarked upon several tours with Strange Music and has worked with several of its artists, including Tech N9ne and Brotha Lynch Hung on “My Favorite,” a standout selection from the just-released Tech N9ne Collabos album Welcome To Strangeland.

Fans that pre-order Prozak’s new album Paranormal online will receive the exclusive bonus track titled “Last Will And Testament”, as well as an autographed booklet and limited edition t-shirt. The song is only available for fans that pre-order the album online through Strange Music.

Prozak has also released his new music video for “Million Miles Away”. The video dares to ask, “If you could change one thing about the world, what would it be?” By tracking down the answers from people of all walks of life, the daring and provocative video shows that Prozak is not only an emcee but is also a street philosopher with a message.