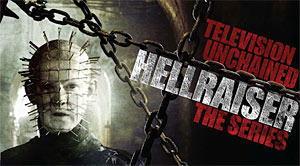 It’s officially announced, the Hellraiser TV series is in development, and the gates of hell will be unchained by your cable/satellite provider sometime in the near future. This will be the first time in Cenobite history that the extra-dimensional beings will be roaming the Earth in a weekly hour-long TV series, each set in the fantastic realm created by Hellraiser mastermind Clive Barker.

Since the Hellraiser reboot was either dropped or postponed, and a poor attempt at reimagining Pinhead was created for Hellraiser: Revelations, just so that The Weinstein Company could hold onto the rights, fans of the Hellraiser franchise should be pleased with this announcement, and should hail to Pinhead for his success at remaining immortal.