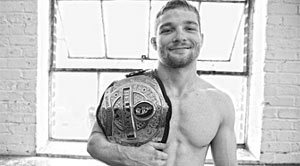 Ever since I watched my first World Extreme Cagefighting event, I’ve been a fan of lighter-weight fighters. Now the UFC has the best Bantamweight and Featherweight division in the world, and I’m pretty sure they’ll soon have the best Flyweight division too once all is said and done. But there are still some fantastic lighter-weight fighters out there. Zach Makovsky, Bellator’s Bantamweight Champion, is one of them. And in a recent interview, he made his case for not only the non-UFC Bantamweights, but any and all non-UFC fighters.

Speaking to MMA Weekly, Makovsky had this to say: “I completely agree the UFC has the majority of the best fighters out there in the world, probably in every weight class, but that doesn’t mean there’s no one else out there. And until they have cross-promotions or the UFC owns everything you’ll never know.”

Currently, Makovsky is 14-2 and an undefeated 6-0 in Bellator. Makovsky won a qualifying bout and all his tournament bouts in order to win the Season Three Bantamweight Tournament and become the first-ever Bellator Bantamweight Champion. He competed twice in 2011, both times in non-title “super fights” that saw him beat first Chad Robichaux and then Ryan Roberts.

Currently, Makovsky is set to make the first defense of his title against Eduardo Dantas, the winner of Bellator’s Season Five Bantamweight Tournament.

Of course, what Makovsky is saying is absolutely true. The UFC has been and more than likely will remain the greatest Mixed Martial Arts promotion in the world… but they’re not the only game in town. They’ve taken down most of their competition, but the simple fact that competition keeps popping up (regardless of how long said competition ends up existing/surviving when they deliberately try to take on the UFC) means that there’s enough good non-UFC stars out there to at least try to establish a different brand.

For the longest time, the clearest example of this was Strikeforce. During the best parts of its run, some of Strikeforce’s shows were amazing enough that the idea of Strikeforce one day becoming a credible alternative to the UFC didn’t seem like just a far-fetched dream. Of course, the UFC now owns Strikeforce and has taken almost all of its top fighters and put them under the UFC banner.

So what’s left? Bellator. And you know what? Even before Strikeforce was bought out by the UFC, Bellator was showing signs of closing the gap between third place and second place.

The proof is obvious: every Bellator season, we get amazing highlight-reel moments from multiple Bellator tournaments. The actual championship fights have also been stellar lately, with two obvious examples being Michael Chandler vs. Eddie Alvarez and Pat Curran vs. Joe Warren, both fights producing new champions that have got a lot of people talking, including non-Bellator fans.