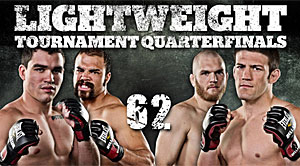 This Friday Bellator FC will put on another live MMA event, and another opening round of a Season Six tournament. For this week’s “Bellator 62” event, it’ll be the Lightweights that step into the cage. Bellator’s Lightweight division is well-known amongst Bellator fans as one of the most exciting divisions in the entire promotion, and I personally am more excited for the Lightweight tournament than I am for any other tournament in Season Six. To explain why, here’s a quick history lesson on the four big names set to compete in Bellator’s Season Six Lightweight Tournament.

First up we have Patricky Freire, who together with his brother Patricio Freire continually stole the show last season. Patricky burst onto the Bellator Lightweight scene when he KO’d former WEC champion Rob McCullough, and then he gave fans an amazing “Bellator moment” when he KO’d Toby Imada with a beautiful flying knee that was followed up by some vicious punches. The 2011 loss was the first (T)KO loss for Imada since 2006, and only the fourth (T)KO loss in a career that has seen him fight almost fifty times.

And finally, Bellator’s Season Six Lightweight Tournament also features Rene Nazare. A master at Brazilian Jiu-Jitsu, Nazare is 11-1 with an even split of four wins by (T)KO and four wins by submission. Nazare has certainly looked impressive in Bellator so far, finishing his first two opponents in the first round and his third opponent in the second round. Despite having competed in Bellator four times, this is the first Bellator tournament Nazare has ever competed in.

Of course, Bellator 62 also features four other Lightweight fighters, although all four aren’t as well-known as the four fighters I’ve highlighted here. And if the opening round of the Lightweight Tournament wasn’t enough, we have the much-anticipated rematch between Eric Prindle and Thiago Santos to finally declare a winner for Season Five’s Heavyweight Tournament.

Putting it simply: Bellator 62 is loaded with top stars and entertaining fighters from one of Bellator’s best and deepest weight divisions, so go watch Bellator 62 and #gowatchbellator!

If you’re a Twitter user and want to get in on the discussion and/or offer up your own insight, feel free to use #gowatchbellator in your tweets to help spread the word.