Cannibal Corpse Wants You “Encased In Concrete” – Plus Tour Dates 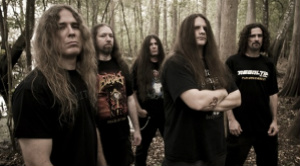 Yesterday, March 5th, death metal godfathers Cannibal Corpse unleashed the third track from the upcoming album, Torture, via Decibel Magazine (click through to hear the track). “Encased in Concrete” is a brutally violent experience, but catchy and hooky, and worthy of being attached to the Cannibal Corpse name. After 24 years and 12 studio albums, Cannibal Corpse haven’t missed a step and remain true to their death metal roots.

Metal Blade’s press release reads as follows: Produced by Hate Eternal’s Erik Rutan, Torture is an undeniable creation of pile-driving brilliance and another testament to the band’s lifelong dedication to the death metal genre. In a 9/10 review of the record, Decibel Magazine proclaimed: “As always, the band’s musicianship is downright inspiring. And their songwriting has never been better.” Hellbound offered up the same rating stating bluntly: “This album fucking destroys and I wouldn’t have expected or accepted anything less.” Blistering crowned the record “an absolute monster from start to finish,” while Metal Underground proclaimed Torture, “the best album since Vile.” Zero Tolerance called it a work of “pure death metal mastery from one of the best bands the genre has ever produced,” and Pure Grain Audio hailed that “Torture is a straight-to-the-point death metal fest that proves that the 24-year-old Cannibal Corpse still has a lot in store and an exciting future ahead of them. Let the musical evisceration happily continue.”

Torture will be available to North American fans on March 13, 2012, via Metal Blade Records.

Sponsored by Metal Blade Records, Good Fight Entertainment, and dB Drum Shoes, the U.S. Torture Tour 2012 will begin April 5th, in Jacksonville, Florida. Support on the near month-long trek will be provided by Exhumed, Abysmal Dawn, and Arkaik. In addition, the band will headline this year’s edition of the Summer Slaughter Festival with official dates to be announced soon.