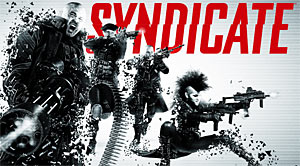 Syndicate is a shooter dressed up with a barebones stealth exoskeleton. While the initial franchise entries tasked you with controlling small squads of Agents, the newest version is a solo undertaking, unless you indulge in the game’s four-player co-op mode. Otherwise, you control Miles as he goes about furthering Eurocorp’s agenda by taking out targets and destroying enemy research. Aiding you in these tasks are a variety of cybernetic knickknacks. Your implanted DART chip allows you to enter the ever-popular bullet time, slowing the world down as you place your shots.

The chip can also breach an opponent’s firewalls, thus allowing the player to do one of the following: force the enemy to graphically kill itself via shot to the head, turn ally for a while or cause your foe’s weapon to backfire. Knowing when to use each of these options can mean the difference between passing a level or ending up as spare parts. The DART chip’s abilities have a cooldown period, making it impossible to spam your way to victory. Miles’ vision is enhanced, permitting you to view the landscape as a sort of digital wonderland via X-ray vision.

Combat in general feels a bit archaic. Circle strafing is the order of the day, making Syndicate feel antiquated compared to most modern shooters. Easily exploited enemy AI is the main culprit here. Boss fights are generally a question of shooting, hiding till your DART skills recharge, running out of cover, wash, rinse, and repeat till victory is achieved. While the DART skills are inherently fun to use, you rely on them so much and so often that, much like Max Payne or F.E.A.R.‘s slow-motion mode, you’ll spend as much time finding ways for your edge to recharge instead of actually engaging in gunfights.

Syndicate’s gameplay is nothing groundbreaking. New enemy types and newer guns come at the player at a pleasing rate, but you’ll have taken part in everything the game has to offer after only a few hours of playing. And considering that the game’s main campaign can be completed in a little over five hours, that’s not a lot of bang for your buck.

Timbuk3 was right: the future really is so bright you gotta wear shades. Syndicate is an extremely bright game. Were you taken aback by the amount of lens in most recent Hollywood blockbusters? Well, get ready to go blind if you pick up Syndicate.

Syndicate takes place is an urban landscape filled with shiny buildings, shiny cars, and shiny television screens flooding every single shiny corner of whatever zone you happen to be in. After recently playing a game as somber as The Darkness II, Syndicate might seem like a pleasant change of pace, but there are limits to even my ability to stare at bright, shiny things… ooooh, a quarter!

Syndicate’s graphics engine is nothing to write home about. It won’t give even a mid-range gaming rig much in the way of heartburn and even with the settings turned all the way up, Syndicate still falls short of even low industry expectations for graphics in a shooter. Character models get the short end of the stick, the developers clearly put a lot more attention into the game world than its inhabitants. Admittedly, Syndicate’s future metropolis is teeming with movement and seems more alive than the dreary setting of Deus Ex but, graphically, there’s nothing here you haven’t seen before in a dozen science-fiction games. Syndicate ran smoothly during my review, I experienced no major crashing or any obvious bugs.

Where the game’s presentation really shines is the audio. Putting aside the glorious explosions and gunfire, which are truly pleasant to the ear, it’s the Hollywood talent that makes Syndicate a joy to listen to. Veteran actor and video game voice over artist Brian Cox is having a blast as Eurocorp CEO and Miles’ surrogate father figure Jack Dencham. Rosario Dawson lends her pipes to love interest Lilly and perpetual movie bad guy Michael Wincott (Metro, Prince Of Thieves) plays your mentor Jules Merit.

Syndicate doesn’t reinvent the wheel, but it does take it for a few spins. As far as mid-range shooters go, you could do a lot worse. I don’t regret having played the game and I expect that a sequel, if the developers correct some of their mistakes, might end up a more worthwhile expenditure of my time. As things stand, Syndicate is worth a rental.