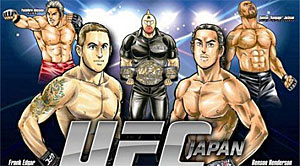 We’re now only a few days away from UFC 144 “Edgar vs. Henderson”. In the main event, Frank Edgar defends his UFC Lightweight Championship against former WEC Lightweight Champion Benson Henderson. The co-main event will also be an interesting match-up, as former UFC Light Heavyweight Champion Quinton Jackson takes on “Ultimate Fighter” winner Ryan Bader. As is customary, here is my official “picks and predictions” post (covering who I think will win and why), now featuring UFC 144. Ryan Bader’s only chance of winning this fight is to grab Quinton Jackson and hold on for as long as possible. Coming off a stoppage loss (his first stoppage loss since 2005), Jackson is going to come in looking for Ryan Bader’s head. My prediction: he’s going to find it. Bader simply won’t be able to keep up with Jackson, and he’ll crumble under the pressure of Jackson’s bombs. Quinton Jackson wins by KO in Round 1.

The first round of this fight is going to be all kinds of awesome. Both men are going to be throwing bombs, both in the form of punches and kicks, and neither man is going to give an inch. Eventually, though, some of the old problems Mark Hunt has shown in the past will catch up to him. His confidence will start to wane as Kongo keeps the pressure up, and his cardio will begin affecting him since he threw so much in the first round. And finally, Kongo will catch Hunt and put him down for the count. It won’t be as easy as it used to be, but my prediction is that Mark Hunt gets dropped and stopped. Cheick Kongo wins by TKO in Round 2.

This’ll be Akiyama’s last stand. He could turn in one of his best performances in the UFC, or he could get taken down for three

rounds. My prediction is… he’s going down and staying down. Jake Shields will come into this fight knowing he needs a dominant win, and that’s exactly what he’ll be fighting for. Akiyama won’t be able to avoid the takedown for long, and since he’s never been much of a puncher Shields can just absorb his shots until the takedown is complete. Jake Shields win by Unanimous Decision.

This’ll be another fight where Yushin Okami shines. With a combination of precise and powerful punching, great cardio, and the occasional takedown which leads to some well-timed Ground and Pound, Okami should be able to win this fight commandingly. I have nothing against Tim Boetsch, but he’s simply out of his element and Yushin Okami is out of his league. Yushin Okami wins by Unanimous Decision.

As much as I like Joe Lauzon, I think this will be Anthony Pettis’ night. Faced with an opponent that wants to finish him just as badly as he wants to finish his opponent, Pettis will get the opportunity to shine in a way he’s never been able to so far in the UFC. This will be a fight where afterwards I can finally say “Anthony Pettis has arrived”. Anthony Pettis wins by Unanimous Decision.