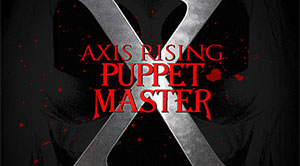 Unlike a certain recently deceased music artist, there are movie franchises which categorically refuse to sink gently into the bathtub. Case in point: Puppet Master. A staple of my childhood video store habits, I rented the series out so many times that when my local rent-a-flick finally went out of business the owner just gave me the tapes, no charge, perhaps realizing that I had paid full price for them several times over. There’s a permanent hole burned in my copy of Puppet Master 2 from all the pausing and rewinding I was doing during certain parts of the movie.

Full Moon Entertainment is coming back in a big way, which is good news for horror aficionados everywhere. We’ve already covered the launch of Fullmoonhorror.com and Yell! Magazine as even been privy to the innermost thoughts of the man himself, Full Moon founder and all around totally awesome individual Charles Band, in our exclusive interview. We here at Yell! are big fans of Full Moon, your faithful reviewer would never have successfully navigated the landmines of puberty without assistance from Mrs. Spradling. Plus, the dominance of Full Moon (and its predecessor Empire Pictures) of the direct-to-video market meant that I finally had something other than American Ninja or The Beastmaster to rent over and over again.

Subspecies, Trancers and countless other ghoulish delights will forever hold a special place near the cockles of my heart. And I’m not just saying that because I enjoy using the word cockle. Though somewhere Beavis and Butthead are laughing their asses off. Despite my affection for many of Full Moon’s offerings, the Puppet Master franchise is the cream of the crop. The flagship series for the studio since its inception, Full Moon is paving for the way for the next installment in minuscule phantasmagoria: Puppet Master: Axis Rising. A direct sequel to the previous entry, Axis Of Evil, Rising is aiming for a Fall release. Axis Rising will feature old favorites such as Jester, Pinhead, Tunneler, Leech Woman and everybody’s favorite series poster boy, Blade!

Axis Rising picks up where 1991’s Toulon’s Revenge left off. Considered by many, including yours truly, as the best in the series, I’m wildly excited to see the continuation of a storyline rife with possibilities. To generate enthusiasm for their movie, Fullmoondirect.com is offering fans the chance to be part of the moviemaking experience. Check out our previous feature for all the information regarding how YOU can become a part of the making of Axis Rising!

Want more Full Moon goodness? Don’t forget out to check out our exclusive Top Ten List of the best Full Moon movies ever made! It’s a good time to be a fan! I feel like a kid again! Where’s my box of old VHS tapes? I feel a Puppet Master marathon coming on… Charlie Spradling here I come!

Ok. That sounded better in my head…