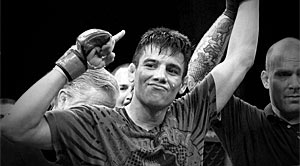 For the past several days I’ve made it a mission of mine to bring a little positivity and excitement to an MMA landscape that seems to have a lot of negativity hovering around it lately. No matter what, I still think it’s an amazing time to be an MMA fan. I love this sport very much, and I think that’s incredibly important to remember while we’re in the midst of another spat of fan flame wars. So here’s my latest effort to sit back, relax, and have some fun: these are the five “dream matches” I’d still love to see.

No.5 Urijah Faber vs. Miguel Torres

Back when both men were in their prime and running through all the best competition the WEC had to offer, I couldn’t think of a greater match-up. It would’ve been amazing to see a prime Torres against a prime Faber, and I’m sad I never got to see it happen. But I’d still like to see these two in the Octagon against each other, just to see who the better man in the here and now is. Even though it would lack the impact of a champion versus champion match-up with both men in their primes, I’m confident that this would still be a pretty amazing fight, so I’d still love to see it.

No.4 Josh Koscheck vs. Jon Fitch

Kinda comes out of left field, doesn’t it? I know a lot of people don’t like Josh Koscheck and/or Jon Fitch, primarily due to their fighting styles and personalities. I know this fight is never going to happen, too, since both men have a bond that’s as close as you can get to family without actually being related by blood. But, still, I’d personally love to see what these two would do against each other, simply because they know each other so well and are still two of the best Welterweights in the UFC.

This is probably the one big “guilty pleasure” on this list. Even with Lesnar retired, I’d still love to see a third and final showdown between these two. Their rivalry was one of the fiercest and bitterest in a long, long time, and their two previous fights both resulted in awesome finishes that were debated and discussed for months. No matter what the future holds for either of these two fighters, I think I’d always be willing to put money down to see this fight.

It might happen one day, but then again… it might not. I sincerely hope it does, because I personally think that the winner of this fight would probably have to be considered the greatest Mixed Martial Arts fighter of all time. That’s a debate we can get into another time, but my point is this: it’s two of the most-dominant champions in UFC history fighting each other, and personally, it’s two of my favorite UFC fighters of all time fighting each other. Of course I still want to see it.

No.1 Randy Couture vs. Fedor Emelianenko

How could anything else be number one? I don’t think I’ll ever stop wishing that I could’ve seen this fight. It could happen tomorrow and I’d still want to see it, just to say that I did. Maybe I’m way too sentimental about this fight because I’m way too sentimental about these fighters: I consider both two of the greatest fighters and sports-related role models of all time. But nevertheless, I honestly think this would’ve been a fight I would have told my grandchildren about one day, as I sat at home in the futuristic equivalent of a rocking chair. But that’s just me.