5 Reasons Why You Should Already Be Excited For UFC 144 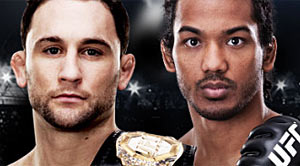 Does anyone else feel strange? There’s not going to be a UFC show tonight, and I feel strange. Does that mean I’m spoiled? Probably. There’ll be a UFC event Wednesday of next week, though. And then we’ll have another week of non-action until UFC 144 on Sunday, February 26. Should we be thinking that far ahead? I certainly am. In fact, I’m very excited about UFC 146. Here’s five reasons why.

Sometimes you just want to see two dudes punch each other in the face until one of them is no longer standing. That’s exactly what you’re in for in this fight. Hunt and Kongo are excellent kickboxers, they’re both headhunters, and they’ve both got tough chins. This won’t end on a weak TKO stoppage, and it’s definitely not ending by submission. These two are going to come out swinging for the fences, and before long one of them is going to connect and add an unforgettable moment to his highlight reel.

4. Yoshihrio Akiyama vs. Jake Shields has plenty of potential.

Shields is a great wrestler with plenty of good submissions, Akiyama is a good all-around fighter with plenty of judo knowledge. I don’t see either man finishing this fight, to be honest, but that absolutely does not mean that I think this will be a boring fight. Rather, I have a good feeling that this’ll be a great three-round war regardless of where it ends up.

3. Quinton Jackson vs. Ryan Bader will be an interesting test for both men.

Jackson is coming off of his first submission loss since 2001, and only the second submission loss of his long and illustrious career. Ryan Bader, meanwhile, recently rebounded from a tough two-fight losing-streak when he KO’d Jason Brilz. Going 1-3 in your last four can still get most people fired, though, so expect Bader to have a “do or die” mentality in this fight. “Rampage” always comes to fight and looking for the knockout, too. A lot of people seem to think Bader isn’t on Jackson’s level, and even if that’s true I still think this’ll end up being one of the night’s most entertaining bouts.

I’ll be honest fans and friends: I never really thought this would happen. The reality of the situation is this: the Japanese market for MMA has shriveled in the years since PRIDE FC’s collapse, you could make a serious argument that it’s reached the point of no return. But of course, Zuffa has made millions (even billions!) in their attempts to make something out of nothing. Who knows how (or even what) this show will end up being? The UFC in Japan should produce an atmosphere that’s totally different from any other place, and seeing just what a UFC show in Japan entails is one of the strongest reasons to watch this card.

1. Benson Henderson vs. Frank Edgar is “Fight of the Year” material, and I’m almost positive it’s going to live up to its hype.

I have never, ever, ever believed that Frank Edgar is a boring fighter. Even when people just considered him a “Lay and Pray” wrestler, I was always cheering for Edgar and supporting him as a “dark horse favorite” of mine. Now he’s coming off two “Fight of the Year” contenders against Gray Maynard, the last of which saw Edgar score an amazing knockout. From an unproven champion to the baddest man at 155, it’s been a joy to watch Frank Edgar perform.