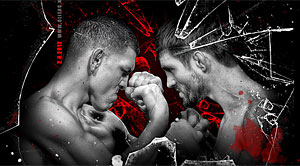 Today is the big day! In the main event of UFC 143, Nick Diaz will face Carlos Condit for the UFC Interim Welterweight Championship. The co-main event will also be an interesting match-up, as top Strikeforce star Fabricio Werdum fights Roy Nelson in his return bout. As is customary, here is my official “picks and predictions” post (covering who I think will win and why), now featuring UFC 143 “Diaz vs. Condit”.

Herman has been looking all kinds of awesome lately, but Clifford Starks has been impressive as well. Starks is undefeated, but I do think Herman will be the one to give Starks his first loss. It won’t be easy, though: both these fighters will push their opponent to their limits. Herman simply has more experience being pushed to his limits. Ed Herman wins by Split Decision.

Renan Barao is going to put a lot of pressure on Scott Jorgensen… but Jorgensen has never wilted under pressure. I think both fighters will go tit-for-tat, and that his inability to overwhelm his opponent will sap at the confidence of Barao. Eventually Barao will become too focused on putting away an opponent that just refuses to be put away, and Jorgensen will counter-punch his way to victory. Scott Jorgensen wins via Unanimous Decision.

As I stated in my “Complete Collection” post, Pierce is establishing a pattern of losing to top competition. He’s never been finished, though, and I don’t think Koscheck will be the one to finish him. Koscheck may strike for a while, but before long he’ll go back to his dominant wrestling. Pierce is going to be spending a lot of time on his back in this bout. Josh Koscheck wins by Unanimous Decision.

Now this is one tough fight to pick. On the ground it’s a toss-up: Fabricio Werdum has fantastic submissions off his back, but Roy Nelson loves to smother people he’s on top of. Fabricio Werdum’s striking has been continuously improving for quite some time now, but he doesn’t have the kind of one-hit KO power that Nelson has been able to utilize.

Here’s what I think is going to happen: I can’t say how or when, but I can’t shake the feeling that Werdum gets caught. Maybe it’s on the ground when he’s attempting a submission. Maybe it’s up against the cage when he’s fighting for position. Maybe he comes in a bit too overzealous on a striking exchange. But I’m predicting that somehow, someway Roy Nelson will be able to land that big bomb of his and put Werdum away. Roy Nelson wins by TKO in Round 2.

If you’ve followed me for any extended length of time, you’ll know by now who I’m picking to win this fight. A lot of MMA fans have a long list of fighters they consider their favorites. There’s nothing wrong with that, it’s just not me. My list of favorite fighters can be counted on one hand.

Nick Diaz is one of those fighters.

I believe in Nick Diaz, I truly do. I believe that his striking, his ground game, his chin, his pacing, and his cardio all combine to make a fighter that not only can survive but thrive against any obstacle put before him.

I know Carlos Condit is one of the best Welterweights in the world, I’ve known this since I first saw him compete in the WEC. This has been a long time coming for Condit, and if he wins I’d certainly be happy that he will finally be getting the recognition and respect that he deserves.

But in the end… I believe in Nick Diaz. I think Nick Diaz is going to survive Condit’s early onslaughts and take him into deep waters, where Diaz excels. It’ll be five long rounds of pure mayhem, but by the end of the third it’ll be clear that Condit is fading while Diaz has only just begun. Don’t be surprised if Round 5 is ruled a 10-8 round in favor of Diaz. My official prediction is that Nick Diaz wins by Unanimous Decision.