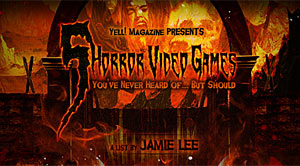 Amnesia: The Dark Descent is among an elite few video games to capture widespread buzz in the horror genre, but it’s left fans of this gaming subculture wondering when the next high-profile horror game will be released. Fear not, devoted gamer geeks! Jamie Lee is here to take you all on an epic journey of remembrance to visit game ghosts of the past, exploring titles that you might not have known about or might have forgotten about. These video games might not have received the recognition of Silent Hill or Resident Evil, but they, at the very least, deserve to shine through the steaming entrails and zombie heads, if even for a moment.

Get your favorite controller, your two-liter of Mountain Dew, your Cheetos, your portable pee container, and get ready to revisit five of our favorite obscure horror video game releases!

Survival-horror video game Siren is the brainchild of the director of the original Silent Hill video game, Keiichirō Toyama. If that doesn’t tell you everything you need to know, you’re in the wrong place.

Siren is set in an isolated Japanese mountain village named Hanuda. Needless to say, it’s not exactly the best place for outsiders. A midnight ritual is interrupted by an earthquake that makes the village teeter between dimensions, complete with eerie red water that has replaced the usual surrounding mountains. At the center of the story is an ancient local religion and the head priest’s goal to summon up a being known as Datatsushi, who calls for the residents of Hanuda to immerse themselves in the red water so that he can create creepy followers called shibitos that will be at his beck and call to ultimately build a nest to house his corporeal form. Oh, and that he wants them to kill all the other humans in Hanuda.

It’s just your usual dark demigod sort of thing in this unique survival horror game that is told from the point of view of 10 survivors and spread over the course of three days, each sequence played anachronistically for extra surreality.

The game is most widely recognized for its sightjack feature, in which players get to see and hear from nearby creatures and humans alike. Successfully sightjacking someone or something can lead you to discover where they’re hiding, what nearby items you can find, and other helpful things to aid you. Direct contact with the shibito is somewhat discouraged. The player characters walk quietly, avoid use of flashlights, and steathily hide behind objects to avoid detection. Displacing a shibito from its position is also a frequently implemented play tactic. Basically, it’s like the Metal Gear Solid of survival horrors.

Even eerier are the facial animation techniques used in the game. Instead of the traditional animation methods, images of real human faces were captured from different angles and superimposed onto the character models. The final effect is incredibly lifelike and adds a little extra something to the game – a little extra something that will probably give you nightmares.

Though it’s not entirely a strict horror game, it does have far too many elements of the horror genre to be left off this list. Blood is a first-person shooter with a story that can best be summed up as Clive Barker meets Clint Eastwood meets H.P. Lovecraft.

You play as Caleb, an undead gunslinger who once led a cult called The Cabal. Their main job was to worship a forgotten god named Tchernobog. Caleb is back from the dead and in the game’s first episode he awakens in a cemetary wearing a black trenchcoat, wide-brimmed hat, and sporting glowing red eyes. Does he sound badass enough yet? To make things even sweeter, the game (not limited to dialogue) is filled with beaucoup horror references, giving nods to The Shining, Evil Dead, Phantasm, A Nightmare on Elm Street, Friday the 13th, and many more.

Your job is to guide Caleb through the strongholds of the Cabal and other hellish areas as he completes his quest to destroy the god he once worshipped. You encounter zombies, cultists, and even possessed hands as enemies, splitting the action between four episodes that each contain eight to nine levels, including a secret level and a boss battle in each one.

The many pop-culture/horror references make this game an absolute delight to play and an even bigger guilty pleasure for horror fans. The brutal violence in the game is another turning point for potential players. You can blow your enemies to bits, sending the gibs raining gratuitously around you. Zombie heads can be shot off and then kicked around like footballs, complete with awesome blood spray. You can also set your enemies on fire! What’s more to want in a shooter? Even the level design is completely decked out with corpses, torture scenes, and other such grotesque finery.

Naturally, Blood created a little bit of public concern and caused a censored version of the game to be released. The game was released on June 20, 1997, and even spawned two expansion packs, and featured LAN capabilities. Not too shabby for a lil’ old DOS game.