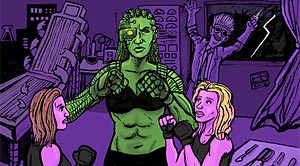 On January 6, 2012, Cris Cyborg’s drug test results came back positive, for Stanozolol (steroids), after her most recent title defense in the women’s 145-pound weight division in STRIKEFORCE against Hiroko Yamanaka. Since this news has been spreading wings like two college girls ready to take on an entire dorm of freshman boys, Monsters of MMA illustration artist, Bryan G. Brown (@bryangbrown), and Yell! Magazine have joined forces once again to take this matter and give it a positive spin. At least we are trying. To us, as shown in the artwork above, it actually looks like a superhuman experiment gone right with Cris Cyborg in the gritty lab of Victor Frankenstein, or some sort.

Why? Well, let’s just say since the day Gina Carano lost to Cris Cyborg, the women’s 145-pound weight division in STRIKEFORCE is just not the same. The division in its current state simply lacks of talent, and of quality female fighters who could even stand a chance to go past one round against the muscly augmented “Cyborg.” We could also say the division was Cris Cyborg, as Ben Fowlkes stated in his article. Without “Cyborg,” the division is in jeopardy of no longer existing. The women’s bantamweight is where it’s at right now, because it’s hot, exciting to watch, and shit is about to hit the fan. “Cyborg’s” last fight with Hiroko Yamanaka lasted less than 16 seconds in a fist-pummelling defeat, thanks to her superhuman strength. Beyond all her power, Cris Cyborg is extremely aggressive compared to other female fighters and would scare the daylights out of any average man. It would take another honest and fearless fighter like Gina Carano to face her again, even without any drug enhancers. So, could this situation be a good thing for women’s MMA in STRIKEFORCE?

Former judo Olympic medalist Ronda Rousey is the next female fighter in the 145-pound division who actually could dethrone “Cyborg,” but has focused her fighting attentions on the beautiful Miesha Tate, who is currently the STRIKEFORCE women’s bantamweigth champion. After numerous call-outs on Miesha Tate across interviews and on Twitter, Rousey expressed her desire to challenge Tate. Well, Rousey was heard, and even if Sarah Kaufman was next in line to fight the champion Rousey will finally face Miesha Tate on March 3, 2012. It is the most anticipated fight in women’s MMA since Carano vs. Cyborg. Can we just speed up time so we can watch the fight sooner than later?

For the moment, Cris Cyborg is joining the dog pile of unprofessional losers who have failed a drug test in the MMA such as Chael Sonnen, Tim Silvia, Chris Leben, and Thiago Silva, just to name a few. The penalty she’s currently facing is a one year suspension with a fine of $2,500.

In the meantime, “Cyborg” will be on the sideline targeting upcoming female MMA stars, and we will just have to wait and see what the future holds for her and the women’s 145-pound division.