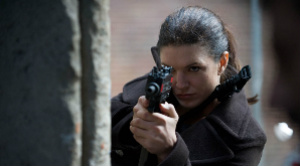 Steven Soderbergh’s Haywire gets its theatrical release next Friday, January 20th, but the first five minutes of the action/thriller can be seen online and here, on Yell! Magazine.

The scene introduces us to Mallory (MMA great, Gina Carano) and Aaron (Channing Tatum) as they meet up in a diner. After some awkward dialog, Aaron attacks Mallory and proceeds to kick the shit out of her. When a poor, unsuspecting bystander intervenes (because no man should beat on a woman), Mallory has an opportunity to turn the tide of the fight — and she takes it. If only Aaron had tapped out.

While Haywire co-stars such Hollywood heavyweights as Ewan McGregor, Michael Douglas, Antonio Banderas, and Bill Paxton (OK, so they might not be heavyweights), it’s a genre flick with appropriately awful acting (if these five minutes are any indication). Still, it’s bound to be a fun-filled action ride that’s enjoyable from start to finish.

Check back next week for Yell! Magazine’s full review of Haywire.

Enjoy the clip and…