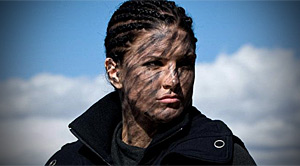 Gina Carano has been out of the MMA spotlight for quite some time now, ever since her first career loss to Cris Cyborg in STRIKEFORCE on August 15, 2009. It’s been a long two and half years, and her first major deal with Hollywood will finally be revealed this month in the highly anticpiated action/thriller Haywire.

Brought to you by the award-winning director Steven Soderbergh (Traffic, Ocean’s Eleven, Contagion), the opportunity was given to Gina over a four-hour lunch. For Soderbergh, it was her fighting abilities that gave her the lock as the lead alpha female role. Haywire also stars Ewan McGregor, Michael Douglas, and Antonio Banderas. Since her defeat, Carano explained in an recent interview that she used it to focus on her movie, which has her performing 98% of the stunts for the lead charater, Mallory Kane, to spend time with family, and to work out some personal issues she has been facing. It would be no surprise to know that the fight against Cris Cyborg possibly had more impact on her than anyone could have imagine, since her dream is to be recognized as the best female MMA fighter in the world, and that dream was shattered in a single night by Cyborg. Carano also expressed how much more she wants to learn about acting, and is convinced that making movies is something you can do in the long-term. With that said, Carano continues to keep it a secret to whether or not she will return to fighting in STRIKEFORCE, but hinted that after Janurary 20th an answer will certainty be revealed. As much as we want to see Gina Carano back inside the cage, rather than focus on film, we just can’t see her doing both, especially if she wants to be the best female MMA fighter. Managing two intense careers would be challenging even for a highly successful female role-model like Carano, who doesn’t believe she is the most organized person in the world. Plus the two female divisions in STRIKEFORCE is stronger than ever with the best female fighters like Miesha Tate, Ronda Rousey, and Sarah Kaufman to name a few. Jumping in on the roster now would definitely be a new challenge for Gina to face, but anything is possible for Carano. She’s capable of quickly moving up the ranks again, and fulfilling her dream to become a champion one day.

Gina Carano is rumored to star as “Circle” in another Hollywood film called Percy Jackson & the Olympians: The Sea of Monsters, directed by Thor Freudenthal. This would see her starring alongside Logan Lerman and Alexandra Daddario. The film is already in pre-production, and is scheduled to be released sometime in 2013.

Time will only tell now, and we will all have to see how well Haywire performs at the box office, and how critics will rate her movie. In the meantime, keep your eyes out on Gina Carano, and check back soon, here at Yell! Magazine, to read the review on Haywire.