Monsters Of MMA No.3: Jon “Bones” Jones Needs To Bury The Next Casket Early Next Year 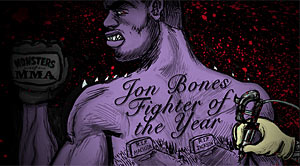 With just nine more days till the New Year, UFC Light Heavyweight Champion Jon “Bones” Jones will easily seal off his honor as “Fighter of the Year,” and possibly be known as the greatest MMA fighter in the history of the sport for what he accomplished in a single year.

No pity here for any fanboy who argues with us, and we hope you find a cozy little hole in the ground where you can vanish for a lifetime. The simple fact is that Jon Jones demolished three of the best light heavyweight fighters in the world. Also note that these three former champions were vanquished within a six month period, which makes Jones’ achievement more than remarkable; it’s unmatched, and he also did it in the most dominate fashion. I once thought Anderson Silva was the Michael Jordan of the UFC, but now I question that every time I sit back and watch in joy a Jon Jones fight. It’s true that Anderson Silva and Georges St-Pierre have defended their title longer, but in comparison to Jones, they have not faced as many high-caliber fighters in a single calender year. For example, to make this statement legit, if GSP annihilated Matt Hughes, B.J. Penn, and Matt Serra in the same year. We could then arguably say he ranks in above Jones in terms of greatness.

To no surprise now, including Dana White who had to reevaluate his opinion of Jones after he defeated Vladimir Matyushenko, and Ryan Bader in his baby steps inside the Octagon. But right now, I can only say, these are some of the reasons why all the hype is around Jon Jones as being the great one in the MMA community. Now we just need to step back, give the man a break, and all the credit we could throw at him for his fine accomplishment this year.

On a personal note, Bryan (@BryanGBrown) and Yell! Magazine have decided to keep the casket open in the Monsters of MMA illustration above, since it’s still uncertain who Jones will fight next. It could be Dan Henderson, but we only hope it’s a casket for Rashad Evans, and even that wish won’t be certain unless he runs through Phil Davis at UFC on FOX 2.