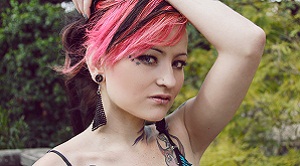 Ah, you wish you had this job: anxiously waiting for the SuicideGirl update to come in and then, if it’s a good day, drooling like a rabid animal. This week’s batch of girls was hot, and diverse. When the update came in with Discoquette we were sure that we were going to feature her again, she’s hot and among our favorites. However, since we already ran a Suicide Monday with her, we thought we’d mention her in the intro so that we could include a gratuatous picture for you to look at. We also thought we’d be extra nice to our loyal readers and introduce you to some new flesh, um, girls.

Eliona Suicide claims to be lost, but that’s because we haven’t sent her a GPS device with directions to our place yet. While we would certainly be thrilled to spend an evening with her watching her awesome selection of movies and playing her choice video game picks, we would much rather take over her hobbie and play with her piercings for her — we promise we won’t hurt you Eliona Suicide… much.

Then there’s Krito Suicide, who will hurt us… or at least she looks like she could. Since she lists Roller Derby as a hobby, we’re pretty sure she could definitely kick our ass. You know what? We’re not entirely sure we would say no. Plus, Krito is from Colombia — and that fact alone makes her seem like a tough chick.

MY DIET: Omnivore
ALCOHOL: Occasionally
MY IDEA OF A GOOD TIME: When I go out, ANYTHING can happen.
I WANT: Friendship
MY PIGEONHOLES: Tattooed, goth, piercing, dirty, fetish

Makes me happy: Good friends
Makes me sad: Lies :c and people who get into the lives of others
Hobbies: Dancing, drawing, walking along the beach, playing with my piercings, watching the sea
5 things I can’t live without: My clothes, my camera, my cell phone, my piercings, and my red lipstick!
Vices: Piercings!
Thoughts on SG: I love it

Makes me happy: ♥My Baby♥
Hobbies: Roller Derby
Vices: Sex, sexy girls 😛 and music
Thoughts on SG: I love it
I spend most of my free time: In another dimension XD