Monsters Of MMA No.2: Arianny Celeste Makes Chael Sonnen Eat His Own Words 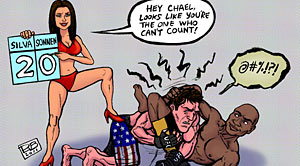 Social media platforms are suppose to bring people together in a positive way, right? Well in the world of MMA it’s a different case sometimes. Some fighters use it as a tool to communicate with their fans, and others, you know, start a 140-character war with their beloved rival. The Twitter beef that broke out last week between UFC ring girl, Arianny Celeste, and Chael Sonnen made headline across various MMA media sources, including Yahoo!, is a very unusual case to say the least. You just never see a fighter scrap verbally with a ring girl. Especially, one who won Ring Girl of the Year four years in a row at the Fighters Only World MMA Awards.

At first, it may have seemed like a story straight out of the 1984 cult film, The Toxic Avenger. A stereotypical 98-pound weakling that transforms into a hideously deformed creature of superhuman size and strength wins over the love of a typical dumb blonde and blind girl. But in the real world, Arianny Celeste isn’t blonde nor blind, and Chael Sonnen quickly learned that the hard way on Twitter. To little, or no surprise, Sonnen tried to keep his love flowing with another low blow. Overall, the beef actually didn’t last long at all, only enough to steer some pointless news, and left Arianny a little insulted at first, but later claimed it was flattering coming from the most intelligent fighter in MMA.

Now you got to ask yourself one quick question, if you know this guy already. Was this really a pointless attempt by Chael Sonnen? The truth to the answer is, not at all. Why? Because the self-marketing genius has everyone talking about him again, including us, and it didn’t even involve UFC Middleweight Champion Anderson Silva this time around. That’s the magic of Sonnen, and one of the reasons why he is so successful in the business.

Once Chael Sonnen runs through Mark Muñoz at UFC on FOX 2 on January 28, 2012, we honestly can’t wait to hear what he has to say next at the post-fight presser. We can only imagine that it will be funny, or controversial. In the meantime, enjoy this newest Monsters of MMA collaboration with comic book artist Bryan G. Brown.

Be sure to check back on December 21, 2011, for our next edition of Monsters of MMA.